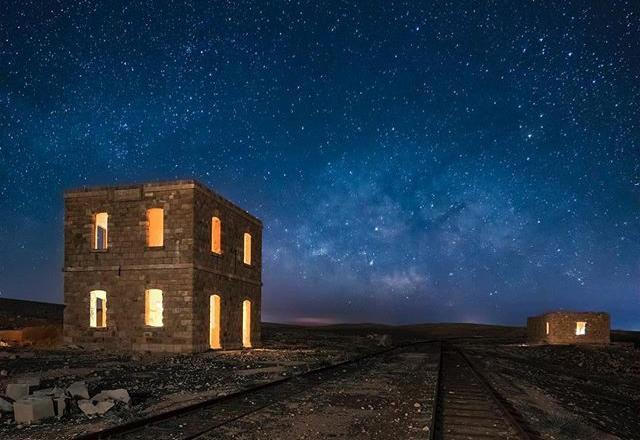 “Night photography is significantly harder than other genres of photography I practice,” Tabbah told The Jordan Times on the sidelines of the exhibition.

Shooting at night demands serious preparation, he stressed, which includes permission to reach and operate at sites at night, and “the thrilling puzzle of lighting up the structures with flashlights”.

“Other factors such as moon cycles, weather patterns and light pollution play a critical role. If there is a full moon for example, most photographs will look as though they are shot in daylight, clouds also obscure stars and city lights,” Tabbah explained.

His exhibition was part of eighth Amman Image Festival organised by Lina Khoury, who recommended the gallery as “an excellent space for his work”.

Tabbah’s work showcased a collection of photographs exploring 21archaeological sites “under the veil of night”, he said.

It was the first time that Tabbah had taken part in the festival as he said that for the past six years he was travelling to shoot and prepare for his book.

“I have been very busy working on my book about Jordan, which was published last December. I have also been exploring the world with my camera, travelling to varied locations such as India, Uzbekistan and Tunisia, as well as the south of France,” Tabbah underscored.

The photographer said his work emphasises the Roman influence in the Levant, when the region saw an incredible boom in its population and culture.

“Many great cities rose throughout the lands; but during the seventh century AD these lands fell under almost constant attack, war ravaged on and an unforgiving plague decimated the population,” Tabbah elaborated, adding that a catastrophic earthquake in the seventh century was a final blow to the ancient civilisations in the region.

“I have devoted years to seeking out these remains with my camera; great works left alone in a state of quiet abandon and perpetual mystery,” Tabbah said. “Nightfall added an incredible visual layer to the scenes... The darkness dotted with countless stars is almost the same night sky the original inhabitants of these places had looked up at, and yet, centuries separate us.”