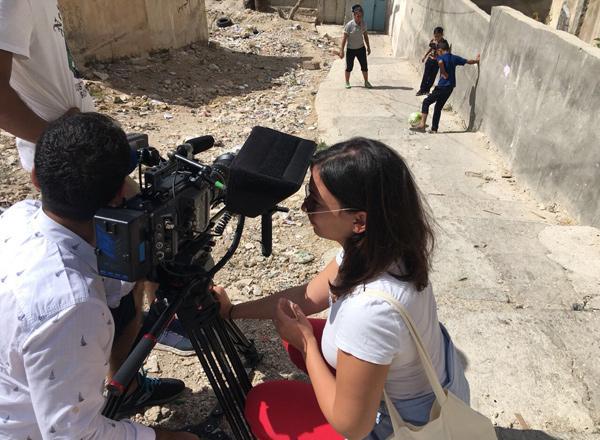 Jordanian Filmmaker on Using her Lens to Trigger Change

AMMAN — According to Jordanian filmmaker Widad Shafakoj, there are other more influential means to exercise activism and press for change than taking to the streets and forming unions — the camera.

Shafakoj has produced a number of documentaries meant to impact and bring about change associated with stereotypes and regulations. She said her films are never fully for pleasure, but for penetrating people’s consciousness and urging them to fight for the causes she deems good, noble and human.

“I am committed to not get swayed into the world of pure entertainment,” Shafakoj said in an interview with The Jordan Times.

She explained that there are a lot of issues and concerns in the country — some have to do with stereotypes and others with laws and regulations — that need to be highlighted, analysed, deconstructed and changed.

“Wherever you look there is a story. We live in a place where there is injustice. When I see something wrong, I really want to try to make it right.”

Her first ever documentary, “ID: 000”, which was initially intended as an assignment for her filmmaking studies, ended up stirring controversy within society.

“ID: 000” explores the lives of children born out of wedlock and their suffering as a result of their social and official status as bearing IDs “with no correct national number” associated with them.

“These children’s IDs had no national numbers like those on regular citizens’ IDs, which start with the actual year of birth which makes it legally correct. On the IDs of children born out of wedlock, they start with 000.”

“This number is considered a fake one. With such a number, these individuals cannot have passports; cannot apply for university or even get a job. If caught by police, they can end up in jail as they would be mistaken as carrying a fake ID.”

Shafakoj said that her “ID: 000” had to face crackdown and “a lot of censorship” before finally seeing the light of day with no cuts thanks to HRH Prince Ali.

“Following its release, people were shocked and alarmed at knowing the suffering of this segment of society. Such a massive reaction led to a push for amendments to regulations allowing those without proper national numbers to request one from the ministry.”

The film led to children born out of wedlock being recategorised as “children with no parental care”.

Following her first documentary, Shafakoj said she learned how far such films can enable people to see themselves through others and recognise that if one segment of the society suffers, the whole suffers as well.

Afterwards, Shafakoj said people started approaching her asking to give them a voice via her films. This is when her second film, “If You Meant to Kill Me”, was made.

The film, which she said took four years of research, tackles the controversy of women who voluntarily turn themselves in to be imprisoned for the sake of seeking protection from “honour killings”. Women featured in the documentary have shared their stories hoping that if their lives would not change, they might at least prevent their experiences from happening to others, according to the filmmaker.

“One of my main aims was to get them out of jail. Why would they be in jail if they are not criminals?”

Shafakoj explained that social stigma is a major obstacle to these women being able to move on. She added that she make an effort to befriend these women, rather than just making a documentary about them.

“I was trying to be their friend as long as I could. No one can make them feel like they are less than any other person, because they are not. At the end of the day, the heartbreak I feel is similar to the heartbreak she feels.”

Shafakoj said that she focuses on finding commonality in order to create a connection and trust to make individuals comfortable enough to share their story.

By sharing their stories, she said, it is then the responsibility of people in power to create change, adding that the goal is to grab the attention of decision makers who can actually create change and not just get people emotional.

This is what happened with her documentary “The Last Passenger”, which addressed the struggles of Syrian refugees who try to escape from the Zaatari camp in Mafraq. Her film revealed how refugees were exploited for their need to escape the camp, but were eventually thrown in the middle of nowhere.

None of the film’s content went unnoticed, especially after being screened in Parliament.

“Those officials in charge of refugees’ well-being were put under investigation after the screening of the film at Parliament. As a result, today, refugees have smart cards which allow them to move outside the camp and take days off without the need to run away. It is no longer like a prison.”

Shafakoj’s last film, “17”, featured female football players who competed in the first ever U-17 Women’s World Cup held in Jordan in 2016. The film, suggested to her by Prince Ali, addresses the misconceptions around gender in sports.

“The film is relatable and is talking about gender exclusivity in sports. There is no sport that is only for men. What matters is what they are achieving for themselves and their country.”

Although two of Shafakoj’s films address women, she has no interest in remaining there. “I don’t want to keep fighting for women’s rights because I do not hope for what is called women’s rights, but human rights for all”, Shafakoj said.

In support of the national film industry, Shafakoj said she hopes that film education in Jordan continues to develop and grow.

“Given the exposure, talents and our privilege to work on massive sets, the local film industry and film education is worth the funds. These advantages are just given to us. But we still need to be able to do great films like Theeb. We need the support because we have the talent.”