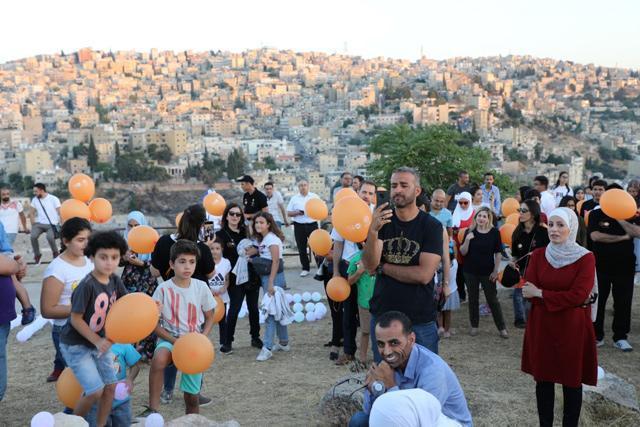 AMMAN — Hundreds of Jordanians released balloons filled with messages of hope at the Amman Citadel on Sunday for a ceremony marking World Population Day.

The United Nations Population Fund (UNFPA) organised the event to mark both the holiday and the agency’s birthday, which are observed annually on July 11, according to a UNFPA statement.

During the ceremony, UNFPA Jordan Representative Laila Baker noted that Jordan was one of the first countries to host a UNFPA office, adding that 25 years later the International Conference on Population and Development (ICPD) marked the first time in history that the world recognised sexual and reproductive health and rights as central to development.

UN Resident and Humanitarian Coordinator Anders Pedersen added: “This year, World Population Day calls for global attention to the unfinished business of the 1994 ICPD. This was the first time that governments across the globe, including in Jordan, recognised that reproductive health and gender equality are a critical part of achieving sustainable development.”

For a country like Jordan, this has been a process that required, and continues to require, working with a broad range of partners starting with the commitment of the Jordanian government, who have continued to support family planning and maternal health programmes since the start. As a result, Jordan now boasts some of the best indicators on health, education and standards of living. But the journey is not over,” Baker said in the statement.

“That will mean a renewed focus on leaving no one behind... but as I stand here among Jordan’s youth, its hope and its future, I am reminded by another visionary person, His Majesty the late King Hussein. I hope you will allow me to end using his esteemed words: ‘Jordan’s capital is its people.’”