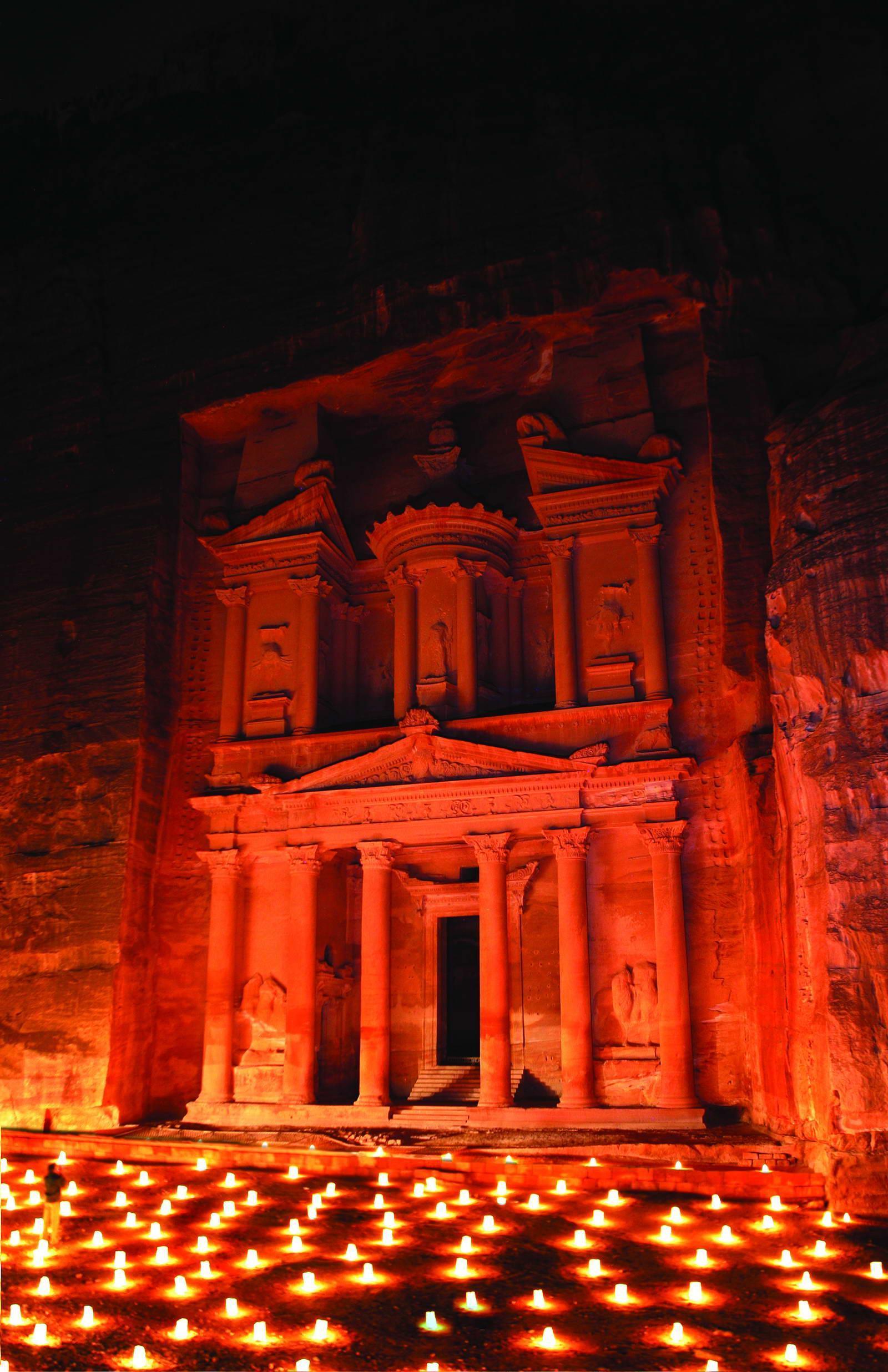 PETRA — Canadian tourist Roxanna Ferguson has recently had what she called a “spiritual trip”, when she walked among the warm candle lit walls of Petra and towards its venerable Treasury at night.

Ferguson was among the approximately 400 tourists who took the 1.2km trek to catch a glimpse of the site at night.

“I visited Petra during the daytime, but night is a very spiritual time [especially with] the candlelight.  The feeling is a little bit different from during the daytime, and it’s nice with less tourists,” she said as she was sitting across from the Treasury.

Local operators and residents started the Petra By Night tour in 2000, to draw more tourists to the area and encourage them to stay longer.

“The tourists stay at least one night to have a chance to catch the Petra By Night event. It has a different atmosphere because they walk between candles at nighttime in silence. They can feel the greatness of the site,” said Ayman Nawafleh, who helps organise the event.

Acting chief commissioner of the Petra Development and Tourism Region Authority, Suleiman Farajat, said that he was originally a tour guide when the programme was first introduced, and between 100 and 120 people used to visit the site in the evenings.

Farajat added that “in October and November of this year, between 900 and 1,000 tourists visited the site a night”.

“The Petra commission did Petra by night on July 7 to celebrate the anniversary of Petra being nominated as the second World Wonder and we illuminated the whole area,” he said, adding that “tourists come in the mornings and spend a long time there, but in the evenings there are a lack of activities so we are working on this side”.

Farajat also said that following their discussions with tourist agencies, they realised that most people come to Petra when Petra By Night is being held.

The tour, which is held three days a week, entails around 1,500 candles that illuminate both the Siq and the area right outside the Treasury.

It also includes bedouins reading poetry and performing traditional music and a presentation on the history of the site’s residents.

Pedro Faustino, a tourist from Portugal, said he admired the efforts to showcase local culture and traditions.

“It is a way to show the culture of Jordan, which is another thing that we do not get to see very much. Usually when people present us tourism in Jordan they just show us Petra, so we can’t get in touch with the music and poetry and stuff like that, which they did very well,” he added.

Farajat noted that a total of 2,500 hotel rooms are available in Petra and from January to November of this year, 757,000 tourists visited the site.

In a recent interview with The Jordan Times, the Jordan Tourism Board’s (JTB) general director, Abdul Razzaq Arabiyat, said that during the first eight months of this year the number of tourists who stayed in the Kingdom increased by 12 per cent, adding that income from tourism also increased by 14 per cent.

The trips operated by both Ryanair and EasyJet also contributed to increase in visitors to the Kingdom, according to the JTB. Around 32 low-cost flights, carrying approximately 180 passengers have arrived from several European countries to Jordan each week since flights began on November 1, the JTB recently announced.