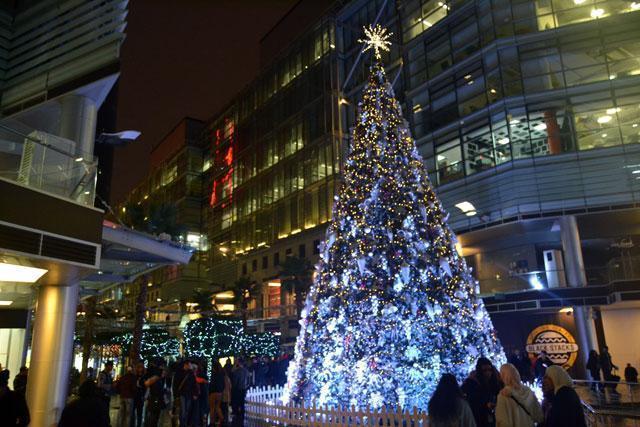 AMMAN — Loyal to its annual tradition, The Boulevard in Abdali has recently kicked off its Christmas celebrations with the lighting of its Christmas tree, igniting the holiday spirit with bright, colourful lights and decorations.

In a ceremony held under the patronage of Princess Rym Ali, the Boulevard announced the start of its Christmas activities, which are set to run through December 31.

Locals and tourists alike braved the heavy rain to attend the tree lighting ceremony, which turned the street into a Christmas wonderland, with carollers, Frosty the Snowman and Santa Claus.

Haylee Johnson, a British mother of three, told The Jordan Times that “I would not have gone out in this awful weather any other weekend, but the smiles of my children upon seeing Santa Claus and the Christmas lights really makes it worth it”.

“This is the kind of celebration where you just forget about the cold and the rain, and let your mind wander to your childhood memories,” she said, adding that she would not want her children to “miss this feeling”.

Locals from across the Kingdom were also attracted to the venue, which brought the very first Christmas experience for some.

“It’s just movie like!” said 14-year-old Sara Aqel, a local from Irbid who was visiting family in Amman for the weekend.

“The tree, the lights, the music — everything here makes me feel like I have just walked inside a dream,” she said.

“The atmosphere and decor was inspired by a snowy winter season, reflected in both classical and modern elements,” organisers said in a statement released on Tuesday, adding that “all decorations are beautifully complemented with a host of colourful lights that add a magical touch”.

The Boulevard is offering attendees musical performances, photo opportunities with Santa Claus and other renowned Christmas characters, as well as a snow slide and play pit, and art workshops held in cooperation with the Haya Cultural Centre.