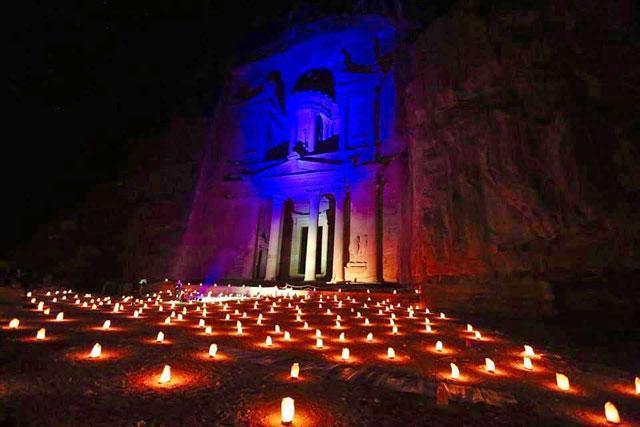 Petra’s Treasury to Light up in Orange, Blue to Mark World Cancer Day

AMMAN — Petra’s ancient Treasury on Monday will light up in orange and blue to show solidarity with cancer patients and victims around the globe, marking World Cancer Day, on February 4.

The event, held under the patronage of HH Princess Dina, president of the Union for International Cancer Control (UICC), was organised by the Petra Development and Tourism Region Authority (PDTRA) in cooperation with the Ministry of Tourism and Antiquities, according to a PDTRA statement.

Princess Dina noted that countries all over the world are illuminating their most famous monuments in orange and blue, stressing that Jordan is at the forefront of this initiative.

“Having our ancient city of Petra, one of the seven wonders of the world, crowning this list is very fitting,” she said, “as Petra is the City of ‘challenge and defiance’ that has withstood the test of time, the natural elements and manmade exploitations, still stands tall to this day, this time adorned in the colours orange and blue, to send a message of determination and hope to every cancer patient all over the world”.

Minister of Tourism and Antiquities Majd Shweikeh said: “Jordan joining this campaign through the lighting up of the Treasury in Petra, is very much in line with the Kingdom’s achievements in the fight against cancer, as well as our efforts in promoting tourism at the same time.”