Deputising for His Majesty King Abdullah, Health Minister Feras Al Hawari on Saturday inaugurated the 2022 International Healthcare Travel Forum (IHTF) under the theme "Amman: the capital of Arab medicine" in the presence of 750 participants from 51 countries. 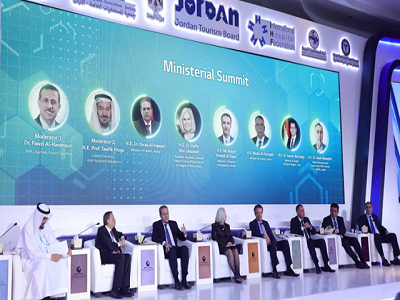 Organised by the Private Hospitals Association (PHA), in cooperation with the Ministry of Health, the Jordan Tourism Board, the International Hospital Federation (IHF), the Global Healthcare Travel Council and the Arab Hospitals Federation, the three-day event in Amman aims to enhance the Kingdom's status as a destination for medical tourism and healthcare travel.

Hawari, in his keynote address, reflected on the increasing interest in healthcare tourism in Jordan, being a distinctive destination for receiving integrated healthcare services.

The minister also said that the forum seeks to strengthen and integrate the roles of various governmental agencies, in order to upgrade the healthcare services in the Kingdom, and “position Jordan at the forefront of healthcare service provision”.

Hawari said that medical tourism in Jordan receives the attention of King Abdullah, which can be seen clearly through His Majesty's confirmation, on several occasions, that Jordan enjoys enough competence to become an excellent destination for healthcare tourism, the Jordan News Agency, Petra, reported.

PHA President and President of IHTF Fawzi Hammouri said that the forum includes 11 specialised sessions. He also praised the Royal support for the medical tourism sector in the Kingdom.

On the sidelines of the 2022 International Healthcare Travel Forum (IHTF), organisers held a ministerial summit titled “Expanding healthcare travel: Road ahead after recovery from the COVID-19 pandemic”, to discuss top achievements and challenges facing the sector.

During the session, Hawari said that the Kingdom’s health sector, including both the public and private, has realised “great achievements” during, before and after the pandemic, which contributed to supporting Jordan’s tourism capabilities.

Interior Minister Mazen Faraya stressed that the general policy of the ministry allows any person to enter the Kingdom to receive treatment, noting that “obtaining a visa and entering Jordan is considered among the easiest in the world”, and does not require prior approval except for some cases that depend on security conditions in some countries.

Faraya said that any person who needs medical care in Jordan can receive a visa after meeting the necessary security conditions, describing these procedures as “simple” that include e-registration and receiving approval within 48 hours.

Assistant Secretary General at the Arab League Hayfa Abu Ghazaleh said that the secretariat general is keen on unifying Arab efforts to increase the investment volume in medical tourism, as the region enjoys rich resources that qualify it to become a global destination in medical tourism, mainly in Jordan.

Health Minister of Iraqi Kurdistan Saman Barzanji said that Jordan has offered training to medical staff in Kurdistan, praising the efforts of the Kingdom’s military field hospital that provided medical services to the residents of Kurdistan.

Executive Director of Hikma Pharmaceuticals Salah Mawajdeh said that the Kingdom’s pharmaceutical industries have realised “great achievements” and their products have reached 70 countries.

Mawajdeh said the company produces most of the medicines that the Kingdom needs, including biological, with a cost that is 20 to 50 per cent less than similar imported medicines.

Tawfik Khoja, secretary general at the Arab Hospitals Federation, during the first session, said: “Jordan sets an example in the area of medical services. And is a model to follow.”