AMMAN  — The fourth edition of Amman Opera Festival (AOF), held under the patronage of HRH Princess Muna Al Hussein, is set to present the renowned opera La Traviata in Amman this November. 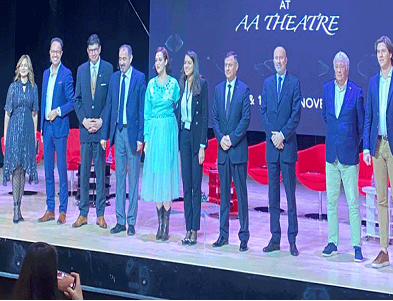 Returning to the Kingdom for the fourth time, La Traviata will be performed at the Amman Academy (AA) theatre on November 16 and 18, starring Zeina Barhoum, the Jordanian soprano singing the role of Violetta, Riccardo Gatto as Alfredo, Carlo Morini as Germont, Eva Macaggi as Flora, Talia Gosheh as Annina, Graziano Issa as Giuseppe, and other singers accompanied by the Italian Piacenza Opera House Choir and the Terre Verdiane Orchestra and musicians from Jordan conducted by Massimo Taddia and directed by Riccardo Canessa, according to the AOF website.

Speaking at a press conference on Thursday organised prior to the festival, AOF founder Zeina Barhoum noted that the AOF is the Arab World’s very first opera festival.

The event is mainly supported by the Greater Amman Municipality (GAM), Jordan Tourism Board (JTB), AA and Royal Jordanian (RJ), she said.

AA Principal Yasmine Nassif reflected on the academy’s commitment and support to developing the Kingdom’s artistic and musical identity, as well as to promoting art awareness.

She added that the AA is heavily focused on creativity and innovation.

Explaining the relationship between tourism and performances, Amer Fakhoury, JTB member, noted that “festival tourism is one of the most important forms of tourism, which supports creativity and unleashes new musical experiences”,

Further, he added that the fact that the festival is currently sold out is “clear proof that the cultural significance of opera is well recognised in Jordan”.

On the same note, Executive Director of Communications and Media at GAM Ibrahim Hashim said that this festival captures the spirit of Amman, and is a valuable addition to other local festivals.

As the national carrier of Jordan, RJ seeks to familiarise tourists with “the Kingdom’s hidden jewels [among which is AOF]”, RJ Chief Commercial Officer Kareem Makhlouf said during the press conference.

“Art is something that RJ is fully focused on, aiming to present Jordan from a new perspective,” he concluded.