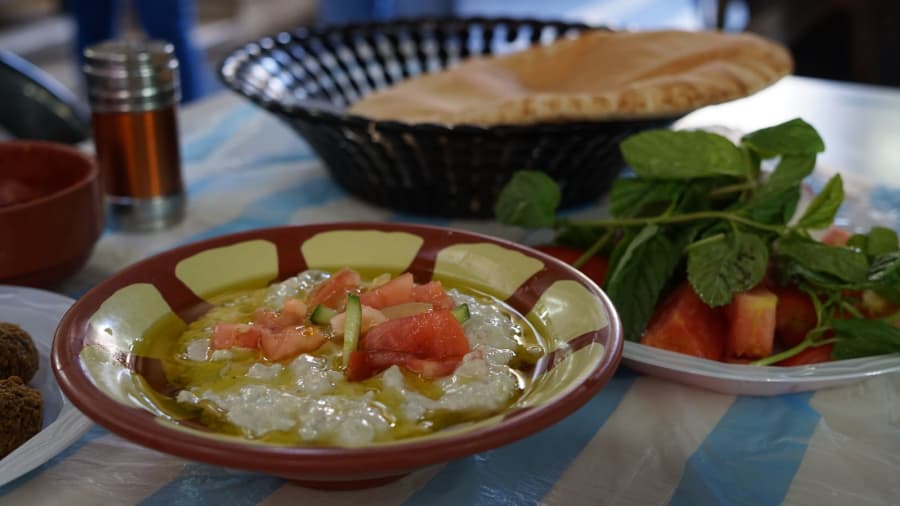 Beyond Hummus: 10 Foods You Must Try in Jordan

In the bustling streets of the earth-toned capital city, conversations might be inflected with Syrian, Egyptian or Iraqi accents, while the country s Bedouin tribes remain fiercely proud of their nomadic traditions and desert heritage.

And at tables across the country, Jordanian cuisine is a delicious immersion in the country s diverse heritage, a vibrant mix of Bedouin flavors and local takes on the Levant s most iconic dishes.
Whether you re sipping sweet tea in Petra or searching for Amman s tastiest falafel, cuisine is an essential part of exploring Jordan. Don t miss this top 10 food and drink list:

Traditionally served in a large platter meant for communal eating, mansaf is a dish of tender meat layered with paper-thin flatbread and great piles of aromatic rice. The meal is garnished with toasted nuts, then eaten with more flatbread and bowls of jameed, a tangy yogurt sauce.
Celebrated as Jordan s national dish, mansaf has deep roots in the Bedouin kitchen, and like the nomadic tribes of the Levant, it s a tradition that transcends international borders, with recipes appearing from Israel to Iraq.
While the classic preparation of mansaf calls for lamb -- or even camel -- some restaurants, including Al-Quds Restaurant in Amman, serve a lighter version made with chicken.
Al-Quds Restaurant, Complex No. 8, King Al Hussein St. 8, Amman

Crisp balls of falafel shaped from spiced, ground chickpeas are a street food staple across the Levant.
As beloved at breakfast as for late-night snacks, falafel balls are often stuffed into warm pita bread for a quick sandwich. But at Amman s legendary Hashem Restaurant, falafel is plated with bundles of fresh mint, raw onion and tomatoes, then served alongside piles of flatbread fresh from the oven.
Tucked into a narrow alleyway, Hashem Restaurant feels like an open secret in the city center, and it s an obligatory stop for Amman food lovers -- even Jordan s royal family drops by from time to time.
Hashem Restaurant, King Faisal St., Amman

Hidden deep in a desert valley, the ancient Nabatean city of Petra was unknown to Europeans from the Crusades until the early 19th century.
Even today, when thousands of visitors arrive on busy days, the vast site hides deserted tombs and caves a stone s throw from the main trail.
But there are Bedouin tents lining even the steepest, most winding paths, and many hikers are invited for tiny glasses of sweetened tea, often steeped with aromatic sage.
Sharing tea is an important part of Bedouin culture, as is their remarkable hospitality. If you sit down to drink with the local Bedouin, called Bdoul, you may be in for infinite refills -- until you signal your satisfaction by placing a hand over the glass.
Seven Wonders Bedouin Camp, Little Petra, Wadi Musa

A crisp layer of pastry threads tops tangy cheese or cream in this popular dessert, which is said to have spread across the Levant with Ottoman rule -- along with the thick Turkish coffee that s a perfect pairing with the syrupy treat.
A favorite for marking special occasions, kunafa is equally good as a sweet afternoon treat. On warm days in downtown Amman, a crowd fills the alleyway that leads to Habibah Sweets, whose kunafa is legendary.
Order a plate, then choose between the steaming trays of sweets. Syrup oozes from the edge of the pastry as brusque servers slide hefty portions onto disposable plates, and customers savor the treats while perched on plastic chairs that line the alley.
Habibah Sweets, Marwan Madi Complex, Al Hazar St. 2, Amman

With the hearty flavors of classic comfort food, maqluba s drama is all in the presentation. After a long, slow simmer over a low fire, this dish of rice, chicken, potatoes and vegetables is inverted tableside.
Depending on the skill of the cook, the result is a tidy cake of turned-out rice that hides rich lumps of meat, or a jumble of ingredients that s just as delicious.
The word maqluba, in fact, means "upside down," and it s a dish that goes back centuries -- a version appears in the 13th-century Kitāb Al-tabīkh, a collection of recipes from medieval Baghdad.
While maqluba is predominantly made at home, it s possible to find in some restaurants. For a taste of home-style cooking, you can learn to make your own at Beit Sitti, an Amman cooking school owned by a trio of local sisters.
Beit Sitti Cooking School, 16 Mohammed Ali Ad Sa di St., Jabali Al Weibdeh, Amman

Drive through the rolling countryside of northern Jordan, and you ll pass trucks piled high with the season s harvest: great mounds of pomegranates from the city of Irbid, crates of freshly-picked olives, juicy lemons and tender dates.
Back in the cities, juice made from seasonal fruit is a favorite treat. Pomegranates are pressed by hand, producing a brilliant red drink made slightly bitter by the white pith that surrounds the ruby-colored flesh.
When the sugarcane harvest is in, vendors stack great bundles of stalks on the sidewalk. Powerful metal rollers produce lightly sweet, pale-green juice, which is served in heavy glass mugs topped with a sugary froth. It s not just sugar water, though -- aficionados claim that fresh sugarcane juice helps maintain a healthy gut.
Sugarcane Downtown, King Faisal Square, Amman

Take a walk through the market that sprawls behind Amman s Grand Husseini Mosque, and you can follow the scent of toasted nuts to one of the capital city s many roasters.
Great metal tumblers are heated with pungent spices, sugar and salt, then filled with everything from almonds to chickpeas.
Choose a sweet or savory variety, or simply go for whatever s fresh from the roaster. Pair the nuts with a few juicy dates -- most nut vendors also carry the sweet fruit from the Jordan Valley, where farmers grow three-quarters of the world s medjool dates, a tender variety that s wonderfully sugary.
Grand Husseini Mosque, King Talal St. 1, Amman

Another import from the former Ottoman empire, slowly-rotating spits of sliced lamb, chicken or beef are ubiquitous in Jordan s cities and towns.
The rich, fatty meat is served in warm pockets of pita bread, then topped with everything from raw onions to za atar, a spice blend that varies with the chef, but relies on sesame seeds and tangy sumac.
Seen from street level, one shawerma place looks much like another, but the sandwich that homesick Jordanians yearn for is the classic version from Shawarma Reem. Blended lamb and beef shawerma is the only option, so you won t need Arabic to order -- just show the cashier how many shawarmas you d like, then join the huddle of locals on the sidewalk as you enjoy the sizzling meat.
Shawarma Reem, Jabal Amman, Second Circle, Amman

With a long tradition as pastoral nomads, Jordan s Bedouin people have developed a cuisine that s perfectly adapted to cooking over desert campfires.
A hearty meal best eaten under the stars, zaarb is a dish of marinated meat mixed with chunks of vegetables, then baked in a pit lined with hot coals and covered over by sand.
When the meat emerges from the ground after a long, slow bake, the tender flesh will be falling from the bones. To eat the zaarb in true, Bedouin style, however, requires a bit of tact and a little practice. Holding your left hand behind your back, scoop up food using the fingers of your right hand, then roll each bite into a compact ball and pop it into your mouth.
Bedouin Directions Camp, Wadi Rum

While plates of creamy hummus have spread far beyond the Middle East to local grocery stores around the world, this is