Jordanians are hopeful for the Ajloun cable car project, which is expected to bring domestic and foreign tourism to Ajloun and enhance economic conditions for local community, says an official.

Ajloun Governorate Tourism Director Mohammad Al Deek told The Jordan Times that the Ajloun cable car project, also known as the Ajloun Teleferique, has started its initial trial phase, but a specific date for the project’s official launch has yet to be announced.

The initial trial phase for the project witnessed great excitement and eagerness from citizens, who reported that the project is “one of a kind”, and is expected to increase tourist footfall and move the economic wheel in the Kingdom’s northern governorates.

Johina Batarseh, who documented her teleferique ride experience on her Facebook page, wrote that it was a “wonderful, once-in-a-lifetime experience”.

“It was a thrilling experience,” said Faeq Frehat, a social media user who also documented his ride. 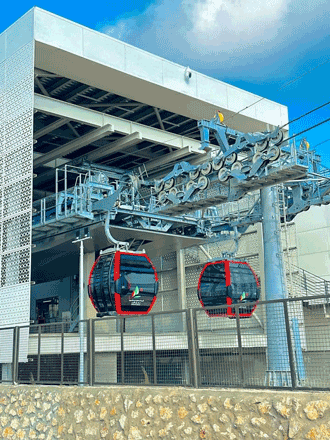 Athar Momani also took a trip on the cable cars during the initial trial phase, and said that the experience was “very positive”, and described the staff as “well trained and professional”.

However, some Jordanians voiced their concern about the price of the ride’s tickets, noting that the prices would ideally be accessible enough for anyone to visit Ajloun and enjoy a teleferique ride.

According to the project’s official Facebook page, the cable car project extends to 2.552 kilometres and includes 40 cars, with each car able to carry up to eight passengers. After boarding, passengers can enjoy a 10-minute trip that departs from Ishtafina Park and ends close to Ajloun Castle.

The estimated cost of the project ranges between JD10-11 million, according to the official Facebook page.

“The Ministry of Tourism has improved the infrastructure of the roads leading to the project, as well as the tourist sites surrounding the project. The cable car project will have a significant positive impact on domestic tourism and the local community,” said the governorate’s tourism director.

Deek added that the project represents “a great addition” to tourism in Ajloun and the Kingdom in general, as it is Jordan’s first cable car project. Increasing the project’s economic return is its association with other tourism projects such as hotels, restaurants, tourist resorts, commercial markets and shops, he said.

“The project will have a direct and an indirect contribution to reducing unemployment in Ajloun,” Deek added.

The project is estimated to generate “at least” 700 job opportunities, according to the project’s official Facebook page.