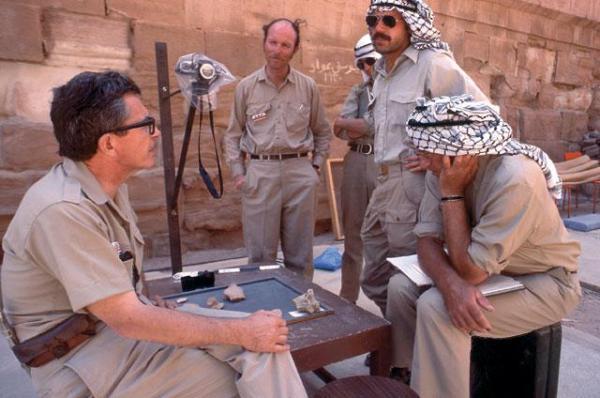 AMMAN — In tribute to American arcaelogist Philip Hammond, a French scholar recalled his unearthing of information about Nabataean architecture and worship practices.

Hammond (1924-2008) spent decades researching Petra and was particularly involved in the excavation of the Petra Theatre and the Temple of the Winged Lions (TWL), said Pauline Piraud-Fournet in a recent e-mail interview with The Jordan Times.

She noted that she learned about Hammond while studying his archives and publications as the TWL Publication Fellow at the American Centre of Oriental Research in Amman.

“He organised his missions a little like a military camp,” Piraud-Fournet continued, noting that his appearance with his uniform and camel-driver’s rod, particularly drew her attention.

Hammond was a close friend of the late King Hussein, she said, adding that he was very fond of Jordanian cultural heritage and lived in Petra for long periods of the year over many seasons from the 1960s onwards.

The archaeologist led the American Expedition to Petra (AEP) at the Temple of the Winged Lions from 1973 until 2005, and before this time he was focused on excavating Nabataean dwellings in Petra, said Piraud-Fournet, who received her PhD in Archaeology from University of Sorbonne.

However, the TWL became the AEP’s main research objective, and during excavations, Hammond contributed to the knowledge of Nabataean architecture and worship practices at this important site, she noted.

He discovered a large number of artefacts, including statues and other objects of worship linked to religious practices of Nabataeans, Piraud-Fournet said.

He also tried to identify the deities represented by statuettes and eye-idols found at the TWL, she added.

“He was a unique man who promoted the culture of the bedouin of Petra and the study of the ancient Nabataeans.”