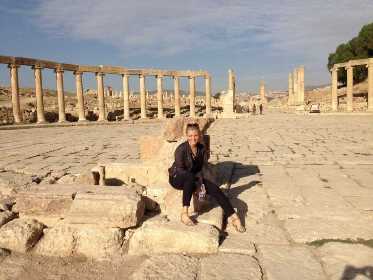 The plight of a forsaken Jordanian sculptor

Although Khaled Munajid, a Jordanian sculptor in his sixties, has been described by his peers as "the living Michelangelo", he is still unable to make a decent living. The highly intricate art pieces he creates take an "extremely long time".Their inherent higher prices make them much harder to sell, he told The Jordan Times in a recent interview, noting that he "cannot produce quickly-made pieces" which would cover his family s expenses.

The sculptor said he does not own his own house and is therefore always "under the mercy" of his landlord waiting for payment.

"I do not know how to make unskillfully sculpted stones and I never tried to, because I respect my profession," the artist said.

Born in Jerash, which comprises one of the best preserved ancient Roman cities, Munajid learnt to carve stones by himself, without the help or a professor or going to any school.

"I think I started to play with stones and shape them when I was ten. Nobody showed me how to do that," he recalled, adding "I am fond of this art, so I dedicated my life to it and I do not leave any art piece unless I am convinced that I gave it what it deserves of work."

He continued: "When sculptors see me working, they think I am almost done but I surprise them when I say that it is still only half way or so."

The artist claimed he can sculpt "a couple of ants in an intimate moment with the actual size out of natural stone".

Munajid, who is barely known in his own hometown, is considered as one of the "masters" in sculpture regionally and even globally, according to Ahmad Abed, another Jordanian sculptor.

"Munajid has never participated in any exhibition nor tried to join any institution like the Jordanian Plastic Artists Association. He is just not interested in becoming famous," a Jordanian expert, who preferred to remain unnamed, claimed.

He also does not use technology like social media to market his work, the expert continued.

About the artist s talent, the expert said: "Munajid is the master of sculpture, at least in the Arab world. Unfortunately, he is only known by his Jordanian and Arab colleagues and a few interested people here".

"Some local and international museums should actually reexamine the authenticity of their displayed artifacts, as they might belong to Munajid, who sells his pieces to people who may be forgers without his knowledge," the expert claimed.