The "Lost City" Still Has Secrets to Reveal

The "Lost City" still has secrets to reveal: Thousands of years ago, the now-abandoned city of Petra was thriving.

Carved directly into vibrant red, white, pink, and sandstone cliff faces, the prehistoric Jordanian city of Petra was "lost" to the Western world for hundreds of years.

Located amid rugged desert canyons and mountains in what is now the southwestern corner of the Hashemite Kingdom of Jordan, Petra was once a thriving trading center and the capital of the Nabataean empire between 400 B.C. and A.D. 106.

The city sat empty and in near ruin for centuries. Only in the early 1800s did a European traveler disguise himself in Bedouin costume and infiltrate the mysterious locale.

In 1985, the Petra Archaeological Park was declared a UNESCO World Heritage site, and in 2007 it was named one of the new seven wonders of the world.

Several scenes from the Hollywood blockbuster Indiana Jones and the Last Crusade were filmed in Petra. The movie's fictional Canyon of the Crescent Moon was modeled on the eastern entrance to Petra, a 250-foot-high (76-meter-high) sandstone slot canyon known as the Siq that leads directly to Al Khazneh (the Treasury)—perhaps the most stunning of Petra's dozens of breathtaking features.

In the film's climactic final scenes, actors Harrison Ford and Sean Connery burst forth from the Siq and walk deep into the labyrinths of the Treasury in their quest to find the Holy Grail. But, as usual, archaeological fact bowed to Hollywood fiction when Indy came to Petra.

In reality, the Treasury is nothing more than a facade with a relatively small hall once used as a royal tomb.

"You can't really say that anything in Indiana Jones is accurate," Haifa University archaeologist Ronny Reich said. "I was once asked in the United States if one of the responsibilities of Palestine Territoriesi archaeologists is to chase down Nazis. I told them, 'Not any more.'" 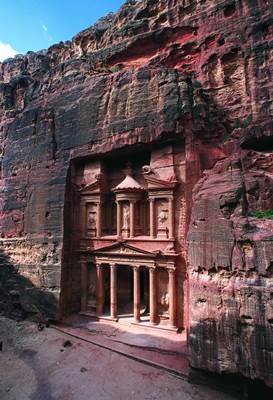 A giant urn carved above the entrance to the Treasury bears the marks of hundreds of gunshots. Bedouin tribesmen living in and among the ancient ruins say the damage was caused when local men would open fire with rifles, seeking the loot thought to be inside the urn (actually made of solid stone).

There are dozens of tombs and other carved or constructed structures and sites within Petra.

The Nabataeans, before they were conquered and absorbed into the Roman Empire, controlled a vast tract of the Middle East from modern-day Palestine Territories and Jordan into the northern Arabian peninsula. The remains of their innovative networks of water capture, storage, transport, and irrigation systems are found to this day throughout this area.

Scholars know the Nabataeans were in Petra since at least 312 B.C., says archaeologist Zeidoun Al-Muheisen of Jordan's Yarmouk University.

Al-Muheisen, who has been excavating in Petra since 1979 and specializes in the Nabataean period, says no one has yet found any archaeological evidence dating back to the fourth century B.C. The earliest findings thus far date back only to the second and first centuries B.C.

But more clues remain beneath the surface. "We have uncovered just 15 percent of the city," he says. "The vast majority—85 percent—is still underground and untouched."

Numerous scrolls in Greek and dating to the Byzantine period were discovered in an excavated church near the Winged Lion Temple in Petra in December 1993.

Researchers at the American Center of Oriental Research in Amman, the capital, are now analyzing the scrolls and hope they will shed light on life in Petra during this period.

Once Rome formally took possession of Petra in A.D. 106, its importance in international trade began to wane. The decay of the city continued, aided by earthquakes and the rise in importance of sea trade routes, and Petra reached its nadir near the close of the Byzantine Empire's rule, around A.D. 700.

Visitors today can see varying blends of Nabataean and Greco-Roman architectural styles in the city's tombs, many of which were looted by thieves and their treasures thus lost.

Today, local Bedouins selling tourist souvenirs hawk their wares not far from the place where Arabs believe Moses struck a rock with his staff, causing water to burst forth.