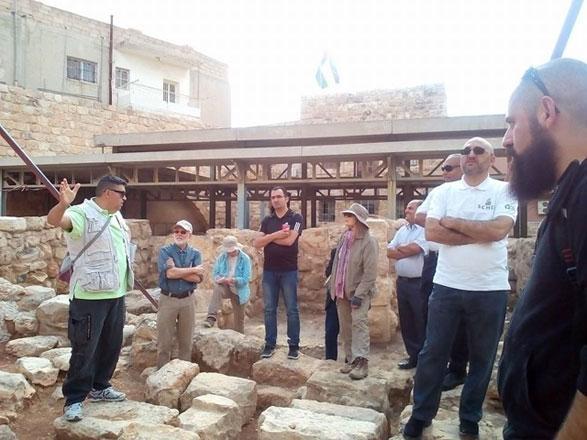 The Activation of Madaba Archaeological Museum

AMMAN — Through the centuries, Madaba has been a symbol of cultural interaction and peaceful coexistence between different religions and cultural traditions, and its long history testifies of the important role of the area, said Italian archaeologist and co-director of the Madaba Regional Archaeological Museum Project (MRAMP) Andrea Polcaro, adding that "we believe it is one of the main values to be highlighted in the new museum of Madaba”.

Speaking at the Talal Abu-Ghazaleh (TAG) Knowledge Forum last week, Polcaro and MRAMP co-director Douglas Clark outlined the aims of the museum projects, including saving the past by protecting, preserving and conserving Jordan s considerable cultural heritage; enhancing the present by developing and enlarging economic opportunities; and securing the future by protecting the past and the people of Madaba.

"The active media campaign is necessary to promote social awareness and to spread the word on the cultural heritage," said TAG Chairman Talal Abu-Ghazaleh, who also expressed his gratitude to international stakeholders involved in the project.

For Cultural Attaché of Italian embassy Federico Vidic, it was of moral interest to build bridges between cultures, which is a significant aspect of Italian-Jordanian cooperation.

"The MRAMP [launched in May 2017] is a flagship because it s a perfect example of how the commitment of Italian diplomatic mission can boost the Italian archaeological mission," Vidic stressed.

For Ali Al Hayat from the Department of Antiquities, Madaba has been a pioneer for the Byzantine period, and there is a need for a comprehensive museum which would be "a centre for historical and archaeological studies, not just a place where collected objects would be displayed".

“A museum is not only a building, but also an active, living centre for the promotion of education, a place to share knowledge, in particular for schoolchildren and scholars, "Polcaro explained, adding that it is also an orientation point for visitors, not only local, but for those coming from all corners of the world, which can reach different regional archaeological sites and tourist attractions through the use of interactive and directional maps.

Regarding the location of the museum, the DoA s choice was a "very good solution" as the Madaba Archaeological Park West is located in the centre of downtown Madaba, and the park hosts several archaeological remains dating from the Roman to the Ottoman period, representing an important part of the history of the city, Polcaro highlighted.

Future projections of the MRAMP include a pre-construction, construction and post-construction phases, Clark said, highlighting the importance of community archaeology as a solution to accomplish these goals, defining local stakeholders such as schools, universities, local businesses, municipality and families as "the key".