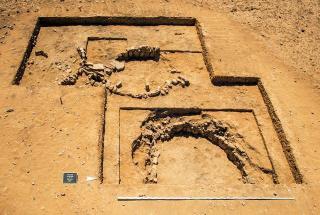 AMMAN — Mushash 163, a relatively small settlement of about 70 x 50 m located some 40km east of Amman near the early Islamic site Qasr Mushash, recently became an object of interest for the German archaeological teams.

The Neolithic settlement from the 9th millennium BC was discovered in 2012 during an archaeological surface survey before being geophysically prospected in 2013, according to Karin Bartl-of the Orient Department at the German Archaeological Institute (DAI).

“The results of these investigations, which must be thought of as a kind of x-ray of subterranean structures, revealed a multitude of circular structures,” she said, noting that the team of scholars suspected that “these could be buildings” and, with the permission of the Department of Antiquities (DoA), carried out small soundings in 2014 to test this hypothesis.

Collaboration between the DoA and the DAI gave concrete results after several short excavations conducted between 2015 and 2017: “The project received generous support from the former DoA director general Munther Jamhawi, as well as from his staff,”  Bartl recalled, noting that no traces of architecture were found on the surface, where only silex tools and flakes were recorded.

“The site is located near a larger wadi in a very dry area with almost no vegetation,” the archaeologist continued, stating that it is assumed that the climate conditions 11,000 years ago were more favorable than today, with likely more precipitation.

Moreover, the settlement consists of a variety of round buildings and was — as the radiocarbon data show — probably used repeatedly over several centuries, Bartl speculated.

Whether the place was permanently settled or was visited only occasionally was not clearly determined, but it was located in an attractive zone for subsistence activities such as hunting, she explained.

Researchers found various stone tools at the site likely made of the local silex.

“These are, in particular, the small projectile points of Khiam and Helwan type, which are characteristic of the end of the 10th and the beginning of the 9th millennium BC,” she highlighted.

In addition, there are also larger projectile points, scrapers and numerous small borers, Bartl underlined, adding that the projectile points have been used for hunting smaller animals such as birds, hares and foxes, the borers were probably used for the production of stone beads.

According to the expert, it is conceivable that in Mushash 163 “more tools were produced than were needed in the settlement”, meaning that there maybe was a production for export.

“The process between about 10,000 and 6,000 cal BC — called neolithisation — is characterised by two essential aspects,” Bartl highlighted, citing the domestication of plants and animals by which certain wild species such as cereals, legumes, sheep and goats are transformed into cultivated or tamed forms.

This resulted in a change in the economic system, since the earlier hunting and gathering of wild species were replaced by the production of domesticated species with more evenly yield. “The first steps of the domestication process, i.e. plant cultivation and animal husbandry, can be observed between 10,000 and 9,000 BC,” she stated.

Sedentism was the second important change. “Even if it was already before 10,000 cal BC that some communities settled almost permanently in one place, this tendency decreases with the beginning of domestication in the 10th millennium BC,” Bartl explained, adding “agricultural cultivation in particular requires permanent presence near the plantations to ensure future yield”.

“Of course, the two aspects mentioned are long-term developments and not sudden events,” the scholar said.

Mushash 163 represents a settlement of numerous solid buildings, some of which are of the “semi-subterranean” type, in which the foundations have been dug into the surrounding soil, she noted, adding that the previously examined plant and animal remains consist exclusively of wild species.

“That means that neither site agricultural cultivation was carried out nor animals were bred, but people lived exclusively from hunting and gathering,” Bartl underscored.

However, the efforts to build houses show that the place must have been located in a region with favorable food resources, providing a longer or perhaps permanent presence of a small community of maybe 30-40 people, the scholar said.

“The settlement site Mushash 163 is an important evidence of the developments at the transition between hunter-gatherer cultures to sedentary communities with productive mode of economy. It belongs to the very few known sites from the first half of the 9th millennium BC in Jordan,” Bartl summarised