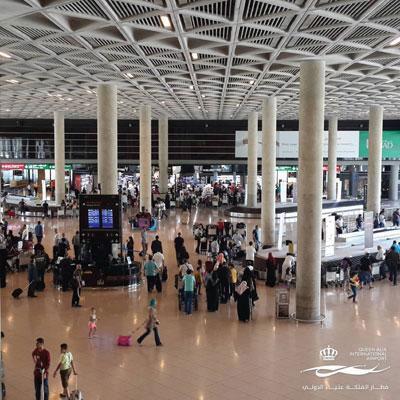 Some 5.9m Passengers Travelled Through QAIA in February 2019

AMMAN — More than half-a-million passengers went through Queen Alia International Airport (QAIA) in February, according to statistics released by the Airport International Group (AIG) on Monday.

Exactly 593,427 travelled via QAIA in February, marking a 9.2 per cent increase in passenger movement from 2018.

The statistics, cited by the Jordan News Agency, Petra, showed an 8.6 per cent in aircraft in February, at 5,521 flights.

On the other hand, AIG statistics show a 4.7 per cent decline in cargo traffic, to 7,139 tonnes, for the same comparative duration.

Over the first two months of 2019, QAIA welcomed a total of 1,247,970 passengers, contributing to a 6.9 per cent hike in passenger movement compared to January and February last year.

He voiced his enthusiasm for the next months to continue achieving better results, according to Petra.

A total of 76,889 flights went through QAIA last year, also registering an increase of 3.8 per cent, comparatively.

However, cargo traffic also experienced a 5.7 per cent decline in 2018, according to the figures.

The figures for 2018 showed steady growth, particularly during the summer months and the holiday seasons.

QAIA’s monthly passenger record was broken in August, when for the first time, it exceeded 1 million passengers in any one month.