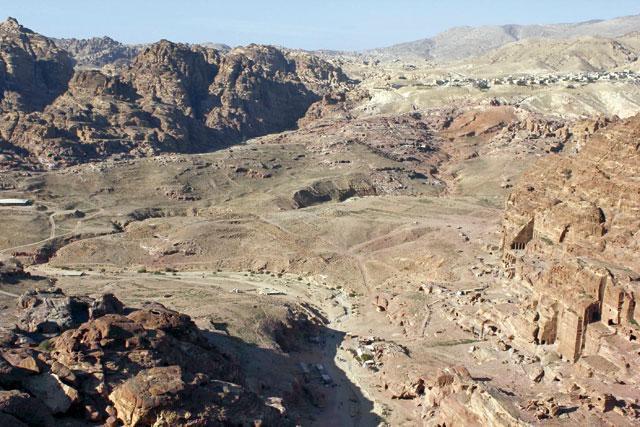 AMMAN — A team of scholars involved in the North-Eastern Petra Project (NEPP) investigated for the first time a whole quarter of the ancient city and not merely a single building.

The idea was to identify remaining structures and their interrelations, said Marco Dehner, a German scholar who completed his studies in archaeology and ancient history at Berlin’s Humboldt University.

“A first hypothesis deals with the idea that this area, indeed, could have been served as a sort of palatial complex or Basileia,” said Dehner, adding that the results show that this area, between the Wadi Musa in the south, Wadi Mataha to the west and north and the Al Khubta massive to the east, is a unique accumulation of buildings and structures of very high standard in Petra, which are somehow separated from the rest of the city centre.

According to Dehner, the most important artefacts documented during the investigations were architectural elements of high quality from the identified structures.

“Those findings seem to confirm a first building phase in the end of the 1st century BC and the beginning of the 1st century AD. The project was mainly undertaken as a survey, no more special finds could be recorded so far,” he added.

“In addition to the monumental temples and buildings in the city centre as well as some private buildings on ez-Zantur, the largest number of architectural blocks such as capitals, column drums, column bases, fragments of pediments, architraves [chief beams] and cornices [horizontal decorative moulding] could be documented on the surface in the NEPP area.”

Even without excavation, clear statements about the monumental appearance of some of the buildings can be made, the historian said, noting that the study on single architectural elements he is conducting is the first comprehensive one of elements of “free-standing architecture, as it is coming from surveys and excavations in Petra”.

The results of the NEPP are also a perfect starting point for a better understanding of construction processes of free-standing buildings in Petra and to compare them with results from other areas, he said.

“As can also be observed in other areas of Petra, the local sandstone was mainly used for the production of structural elements such as ashlars or column drums, but also for individual building elements with a decorative character. This material was usually added only by limestone, which could also be quarried in relative proximity to the construction site in the area of today’s Wadi Musa,” Dehner said.

He also explained that the individual sandstone blocks used during the construction did not exceed a size of about 100x50x40cm,  and were usually of smaller size (90x40x40cm or 60x30x30cm) he claimed, which points to a certain level of standardisation. “The masonry technique is comparable to that of the other buildings in Petra, namely the Temple of the Winged Lions, the Qasral-Bint, the Great Temple and ez-Zantur IV.”

“The size of the used blocks meant that individual elements, such as pediments, architraves or cornices terminating in a sima [upturned edge of a roof], had to be composed of several blocks of sandstone, as the original material often did not allow an element of a certain size to be made from a single block. As a result, the Nabataeans seem to have optimised their construction processes very economically and standardised the manufacturing processes in their sequence.”