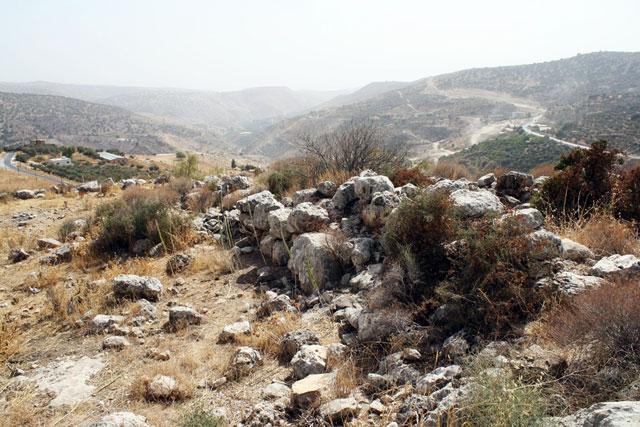 AMMAN — Khirbet Jazzir, some four kilometres southwest from Salt, was mentioned in scholarly literature as biblical site Jazer, according to a German archaeologist.

“The archaeological site rests on a natural pointed rock outcrop that seems to have been artificially modified in large parts to create horizontal levels on which stone walls could be erected,” said Alexander Ahrens from the German Archaeological Institute in Berlin.

The flat plateau at the top could only be reached by a narrow passageway located at the eastern side of the rock outcrop, he told The Jordan Times in a recent e-mail interview.

That this is the place the Old Testament referred to as Jazer has been discussed ever since Roland de Vaux, a French Dominican priest and biblical researcher, visited and surveyed the region in 1937, Ahrens said.

“Although the location of the site generally seems to fit well with the geographical descriptions given in various written sources for the location of Jazer, several other sites also have been proposed to be the biblical site,” the archaeologist said.

Many scholars took over de Vaux´s tentative identification of Khirbet Jazzir with Jazer, but “no one ever visited the site and sampled material helping to reveal its chronology”, Ahrens said.

After a recent re-evaluation of the pottery found at the site it was concluded that it was not occupied during the Iron Age, the archaeologist said, adding that it therefore cannot be identified with the biblical site of Jazer.

“The site does not seem to have been an actual settlement in the strict sense of the word, but may instead have functioned as an outpost or rural farmstead of the Byzantine and mediaeval Islamic periods,” Ahrens noted.

There is no evidence for the existence of a densely settled lower town, he continued, adding that rather, the immediate vicinity around the site seems to have been used as agricultural land, which then seems to have been administered by the farmstead located at Khirbet Jazzir.

Several installations found at the site, such as remains of oil or wine presses and several underground vaults, point towards the processing and storage of agricultural products, such as olives, grain or even grapes for wine production, Ahrens said.