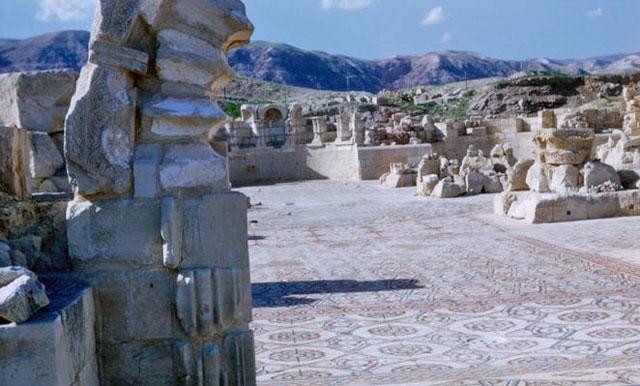 Region’s Distinct Geometric Motifs May Have Originated at Ummayad Palace

AMMAN — Since research about the site was published in the 1950s, an Ummayad palace near Jericho has attracted historians of Islamic art, according a professor of art history.

“Since its excavation in 1930s by the Palestinian archaeologist Dimitri Baramki, the Ummayad palace at Khirbat Al Mafjar, so-called Hisham’s Palace, has delighted those interested in art of the Late Antique and the Early Islamic periods,” said Assistant Professor of Art History at Bowling Green State University Sean Leatherbury

He noted that the palace complex contains a collection of low walls, re-erected columns, modern concrete piers, bits of architectural sculptures and mosaics of so-called diwan on the north side of its bathhouse.

The many decorative elements of the palace are kept at Rockefeller’s Museum in Jerusalem, he continued at a lecture titled “The Mosaics at Hisham’s Palace at Khirbat Al Mafjar” held on Monday at the CBRL British Institute in Amman.

Leatherbury said these motifs give an impression of ornateness about the palace, with male and female figures representing servants, soldiers and a patron, a standing khalif, as well as animals (birds and gazelles) painted in a rich range of red, orange and blue. The professor added that these figures were striking to scholars of Early Islamic art as they depicted near life-size figures in three dimensions.

Furthermore, to the north of the palace complex, new excavations run jointly by the Palestinian Department of Antiquities and the University of Chicago have uncovered a garden and a bath next to the palace, he noted.

“In addition to the congregational mosque, two other mosques have been excavated,” Leatherbury said, which indicate the site was used for a variety of functions both public and residential.

The paper presented at the event examined the geometric mosaics found at buildings and their relation with similar structures in the Syro-Palestinian context of the Late Roman and the Early Islamic periods’ art.

According to the researcher, the mosaics were the result of fourth century AD artistic experimentation with geometric patterns suitable for private quarters and temples.

The artistic trend was typical for the period between fourth and eighth centuries AD, and was a good example of art cohabitation and cultural practice between the Byzantine Empire and Umayyad state.

Focusing on the bathhouse, the scholar drew regional parallels to desert castles in Jordan and structures further north in the city of Antioch and those in modern day Turkey.

“Most geometrical motifs in Umayyad bathhouses are from the Late Antiquity in their conceptions and they were used in the range of buildings in the Eastern Mediterranean. From the fourth century this distinctive Syrian geometry of rainbow style began to spread outwards, influencing mosaics of surrounding regions including Palestine. The second thesis is that these motifs were later present at churches in Um Al Rasas [St Steven’s Church], and they were executed at the same time as mosaics of bathhouses by the same workshops,” Leatherbury said.