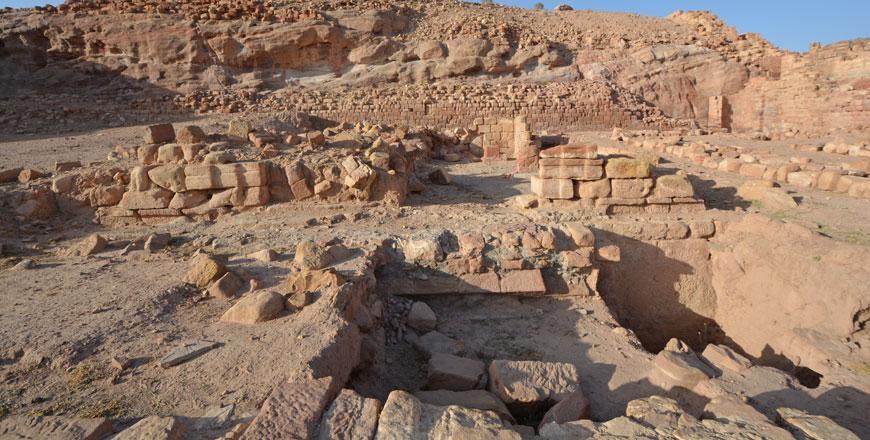 In the heart of the ancient Petra, a preliminary survey and excavation of the "Lower Market" in 1998 disclosed a monumental swimming pool, dubbed Petra Garden and Pool Complex (PGPC).

Located at the centre of the city on an artificial terrace, the PGPC overlooks the Colonnaded Street, between the "Middle Market" and the Great Temple, explained scholar Leigh-Ann Bedal, who received her PhD in anthropology from the University of Pennsylvania.

"The PGPC was constructed early in the reign of Aretas IV, which puts it at the very end of the 1st century BC or early 1st century AD. I interpret it as an ornamental garden [paradeisos] that is part of a larger elite complex on the Southern Terrace of Petra’s City Centre," Bedal explained.

The elite complex includes the Great Temple, the PGPC, and the unexcavated areas that were labeled the “Middle Market” and the “Upper Market”, and the elite complex was identified as likely to be a palace, "one of at least three identified in Petra", according to the scholar.

Based on its location along the main road, Bedal suggested that it was most likely an administrative function, but further excavations are needed to determine that.

"We used ground-penetrating radar in 2001 which provided information about the layout of the garden terrace. Then, we excavated strategically placed trenches to confirm and better define features that appeared in the GPR and to analyse the soils and understand the stratigraphy for the site chronology. We know from phytolith analysis that the garden terracewas planted with palm trees — probably date palms," she continued.

"The complex has an island with a pavilion that is designed to enjoy the surrounding views of the garden and pool," Bedal explained, adding that the pool was filled and buried many metres of soil over the last 1,800 years since it went out of use. Therefore, its excavation is a major earth moving task to uncover the perimeter of the pool and recover the collapse darchitecture that will inform us better about its design and appearance".

The late 2nd century was the turning point and the pool stopped being maintained, she claimed, saying: "This is a period of Petra’s history when the economy declined under Roman rule. Maintaining a luxury garden and pool that consumed a large quantity of water would become unsustainable."

"Over time, as the population of Petra declined, the Southern Terrace, including the PGPC, converted to agricultural fields that supported the Byzantine settlement concentrated across the wadi on the North Ridge," she highlighted, noting that the function of the site for cultivation of crops continued well into the 20th century when Bedoul families grew wheat and other crops.

The archaeological team plans to excavate a large amount of soil "in order to better reveal and understand the pool monument".

"In addition to further excavations, work has begun on conservation and management of water runoff during the winter season to prevent damage to the site.  Sela for vocational training and protection of cultural heritage, under the direction of Elena Ronza, is taking on this responsibility," Bedal concluded.