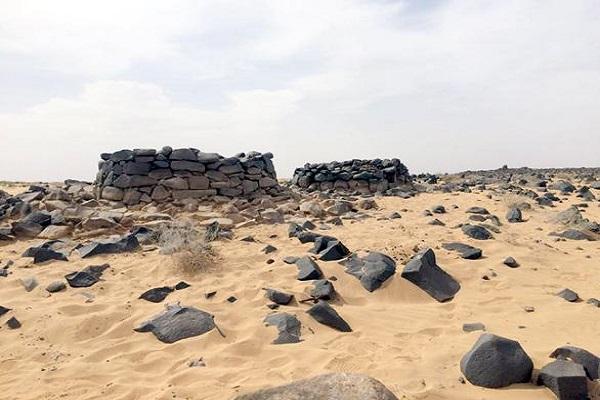 AMMAN — Recent fieldwork at the vast desert region in north-eastern Jordan has revealed an immensely rich heritage of an area that is difficult to access and archaeologically less known, according to a Dutch archaeologist.

Just a few months ago Professor Peter Akkermans published a book titled “Landscapes of Survival –The Archaeology and Epigraphy of Jordan’s North-Eastern Desert and Beyond”.

The book focusses on Jordan’s desert region and demonstrates its importance through the ages,Akkermans told The Jordan Times in a recent e-mail interview.

“The new discoveries emphasise the prominent cultural successes in the past thousands of years achieved by indigenous [semi]nomadic peoples in exploiting the basalt desert and adjacent gravel plains,” he said.

He added that the book offers detailed and up-to-date insights on topics ranging from the earliest, prehistoric, inhabitants of the north-eastern badia to settlement and burial practices from the Bronze Age to the Early Islamic period, as well as the role of rock art Jordan

The research in Eastern Badia is conducted in cooperation between the Department of Antiquities and the team of archaeologists from Leiden University, in The Netherlands, lead by Akkermans.

Regarding the burial practices in the Black Desert and the mobility of the indigenous population, Akkermans said that their research focuses on the many hundreds of burial tombs in the Jabel Qurma area — a rugged and harsh region which begins some 30km east of Azraq.

“We have extensively carried out both surveys and excavations in the region, and documented in detail the many tombs [the investigations are urgent and timely, as many sites are threatened due to modern, illegal, looting]. There are several types of tombs, of which the ones in the shape of round towers [up to 5 m in diameter and 1,5 m high] are perhaps the most eye-catching. Most of these graves date to the Bronze Age and, in particular, the Iron Age [say, from ca. 2200 to 100 BC].”

The tombs must have belonged to local people that were mobile to a very large extent, he said, adding that the team during their surveys and excavations found a number of small camp sites from these early times, consisting of enclosures with walls made of roughly piled basalt rocks, that were used for relatively short periods of time.

The early inhabitants of the area moved through the basalt region and into the adjacent plains, living on animal husbandry and  hunting and gathering, he said.

They brought their dead to the tops of the basalt hills, where the tombs were constructed, he added.

“The tombs in these high places were highly visible and enduring monuments for the ancestors, seen from large distances away. For modern visitors to the basalt desert, they are spectacular remnants of a fascinating and rich pastthat rightfully deserves intensive study and attention,” Akkermans said.

The first humans arrived to the northeast Jordan around 400, 000 years ago, the professor said, adding that the fieldwork in and around Azraq has produced much evidence for settlements in the past tens of thousands of years.

“It is very important to realise that north-eastern Jordan certainly was not a marginal or peripheral region in the past, but always a vibrant focus of human activity!,” Akkermans said.