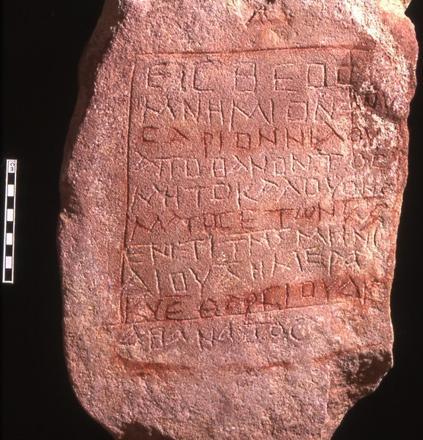 AMMAN — The evidence gathered from Petra, the Negev Desert and Dead Sea region proved the presence of Nabataean culture long after 2nd century AD and Roman annexation of the Nabataean Kingdom.

According to a Greek scholar, archaeological surveys, excavations and inscriptions found at these sites indicate that Semitic people with Nabataean characteristics existed in the area of southern Levant.

The evidence shows a continuation of “religious practices, funerary customs, language, inscriptions, art, architecture and apparel”, said Konstantinos Politis, the chairperson of the Hellenic Society for Near Eastern Studies.

“These, together with the literary testimony, combine to make a compelling argument for a Nabataean cultural continuity into the early Byzantine period,” stressed Politis.

The continuous occupation of Nabataean sites is evidence that Nabataean people under the Roman and Byzantine empires did not cease to physically exist, the veteran archaeologist said, adding that they had the tenacity to adapt and were able to continue to express many of their remarkable cultural values.

“Therefore, many modern Jordanian Arabs are proud to identify with the Nabataeans as being their ancient ancestors,” Politis underlined.

The question researchers are trying to answer now is how much the Nabataeans changed after Rome annexed their kingdom in 106AD.

“By the time of the Roman conquest, the Nabataeans were a cultural entity possessing their own Aramaic dialect and associated script, distinct religious pantheon, characteristic art style, architectural forms and a territory centred at Petra and Madain Saleh,” he explained.

The Romans may have planned to neutralise Nabataea by establishing a new capital of Arabia, encompassing most the Nabataean territory, at Bostra in the Hauran region.

However, the Nabataeans themselves may have decided in the late 1st century AD to move northwards in order to remain competitive on the trade routes.

In either case, the result of this northern relocation was to bring the Nabataean centre much closer to the Roman powerbase in Syria, the scholar claimed.

Later on, the Byzantine administration further divided the Nabataeans by separating them into two provinces of Palestine, Politis said.

“To a great extent these efforts succeeded, but the underlying response was that many of the indigenous Nabataean Arab people overcame these pressures, and together with their physical survival managed to retain many of their cultural traits and customs,” Politis elaborated.

Written sources in the form of documents, literature and epigraphy play a role in defining an ethnic group.

“Therefore, investigating the most recently found Nabataean inscriptions is crucial in determining the survival of the Nabataeans,” the Greek scholar added.

However, not many inscriptions from the Early Byzantine period have survived, “and none at Petra”.

“A rock-cut tomb at the Qasr Al Bint in Madain Saleh [in Saudi Arabia] has a Nabataean inscription dated to 267AD, which indicates the continuous use of this important necropolis together with the Nabataean language into the later Roman period,” according to Politis.

Another late Nabataean inscription is inked graffiti on the wall plaster of a building at Oboda, in the Negev Desert, dating to the 4th century AD, which invoked the Nabataean gods Oboda and Dushara, Politis said.

“This not only demonstrates the persistent use of the Nabataean language and script, but also a continued veneration of their original pagan religion, through Oboda who remained well-known in the late Roman period,” Politis stressed.

The scholar added that the survival of the Nabataean language and people is evident in Greek inscriptions found in the Ghor Safi from the Byzantine-Christian period, which contain the Hellenised versions of Nabataean people and place names.

“These [inscriptions] verify the preservation and continuity of Nabataean heritage in ancient Jordan,” Politis underscored.