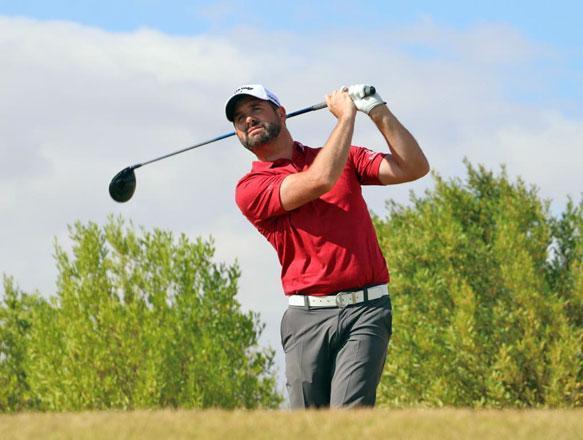 AQABA — Players from around the world on Monday wrapped up their “Journey to Jordan” golf tournament in the Kingdom’s port city.

It was the second time the MENA Tour had visited Aqaba for what organisers said they hoped would build upon the already established attractions in the Kingdom and boost Jordan’s image as a tourist destination. The tournament brought with it 117 players flooding into the city, to chase the largest purse offered in the tour’s history — $100,000, according to a statement by organisers. The tour has one more tournament in Aqaba before another return trip to round out the series in November.

“I’ve been here for about 12 days now, so it’s been quite a long time. Typically, I go and golf at a place for about six days,” Scottish golfer Scott Henry said after the tournament. “When you stay at a place for 12 days, it’s quite a long amount of time to spend at the same resort, but it’s been great. I’ve been really impressed with the golf course, but then everything around it as well. It’s been fun.”

The professional golfer added that he has played in tournaments around the Middle East, in countries such as the UAE and Oman, but Aqaba’s development and the hospitality of the locals caught his attention.

“A lot of the other Scottish guys I’ve been hanging out with have gone into the town, had a couple of meals and kind of toured the places, and it’s been kind of new. But what has been nice is that people have been really chilled out and friendly,” he said.

Chris White of Ayla, which hosted the tournament, said the idea of building a golf course in Aqaba was to add value to the city, adding that many players went on to take trips to Petra as well.

The 18-hole course itself is the only one in Jordan up to par with international standards and — despite the stark but scenic contrast of greens to sand-coloured mountains rising in the backdrop — uses genetically-engineered grass which can tolerate the more eco-friendly mixture of well and treated water used to maintain it.

Henry, who ended tied for 21st, said that he plans to come back to Aqaba in April with his wife for a mixed tournament, adding that despite the obvious obstacles of competing against “your spouse”, he was looking forward to the visit.

“It’s not that big of a city [Aqaba], but it just seems like this place is developing. It looks like it could kick off and grow, and we’ll see where it ends up,” Henry added.