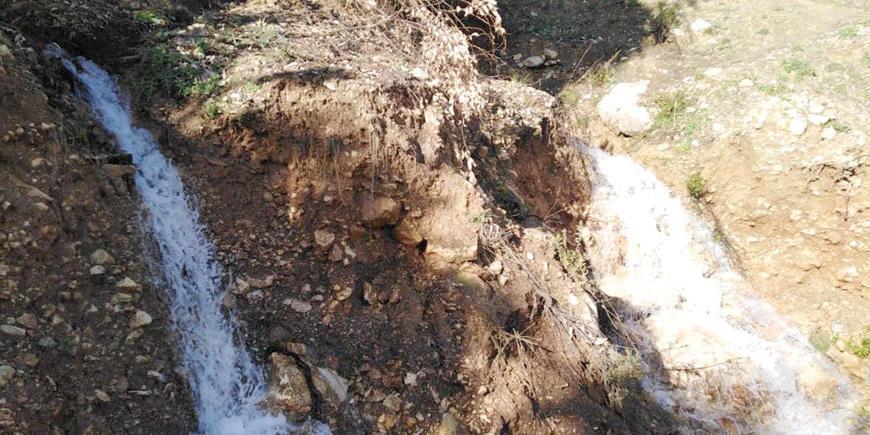 Jerash Springs Burst Back to Life After Recent Rainfall

JERASH — An estimated seven or more springs were revived after heavy rain fell on Jerash and its surrounding districts this past week.

According to a report by the Jerash Agricultural Directorate, during the latest depression alone, which intensified on Wednesday night, the area received around 70 per cent of its annual rainfall. Some of Jerash’s districts, such as Souf and Sakeb, which are higher in elevation, received 86 per cent of their annual rainfall.

Most of the revived springs are located in Sakeb, a village 9.7km west of Jerash and one of the only two districts in Jerash, along with Souf, which saw snow. Residents said the springs had been dried up for decades.

“My dad would always plant tomatoes and potatoes along the spring’s stream where they would grow big and ripe. Even though the spring dried up more than two decades ago, I stuck to that pattern, and I am now awfully glad I did,” said Fawwaz ِAlbanna, a Sakeb resident whose farm is now split by the newly-revived Jahdab Spring.

Other renewed springs include the Umm Jozeh Spring, Haymar Spring and Marj Spring, among others.

Hani Ayasrah, whose farm is near Wadi Salem and another spring, told The Jordan Times he had “not witnessed heavy rain that truly turned the soil to mud half a metre deep in the last few years, until last weekend”.

He added: “Even on occasions when people said there was ‘heavy rain’ in the past, I would put my hand in the soil and see that the water had only reached around 2-3 centimetres down, but this time it reached much deeper than that. The trees are thoroughly watered.”

Alya Sweidi, an agricultural engineer at the Jerash Agricultural Directorate, told The Jordan Times that the springs did not suddenly recoup after one heavy rainfall, adding that they had been storing water from previous wet seasons until they finally burst.

The latest depression also affected the King Talal Dam in Jerash. The dam has reached more than 63 per cent of its approximately 77 million cubic metre (mcm) capacity, with 47mcm already filled.

“We are expecting a good year ahead for our farmers who have been struggling with keeping their trees and plants alive during the past seasons due to heightened water tank prices and very little rain,” said Sweidi.