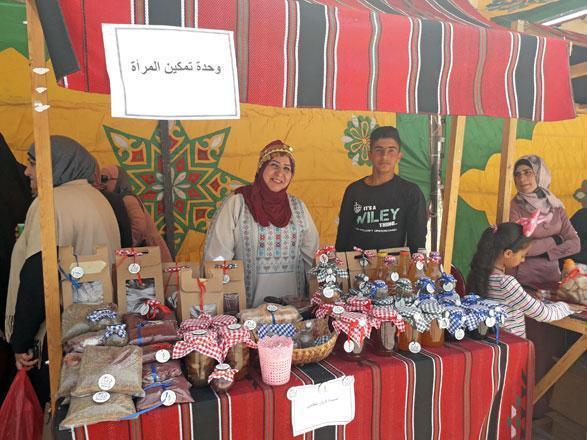 Around 50 women from Jerash Governorate, 45km north of Amman, showcased their homemade products at the Archaeological Park of Jerash, where tourists had the chance to buy those products directly from their makers.

The Mouneh (food supply) Exhibition was organised by the Industry and Trade Directorate in partnership with the Greater Jerash Municipality, the Economic Productivity Enhancement Centre (Irada) and the Jerash Department of Antiquities.

The expo aims to market local products in the framework of the strategy of the Ministry of Industry, Trade and Supply for promoting small enterprises and local industries and facilitating trade and shopping.

During the opening ceremony, Jerash Mayor Ali Gogazeh noted that the municipality, through its Woman Empowerment Unit, seeks to find new opportunities for local women to market their products thus increasing sales and improving the standard of living of their families.

Jerash Department of Antiquities Director Ziad Ghunaimat said that the establishment of the exhibition in the ancient city allows tourists to get acquainted with the culture of Jordanian society and to shop for local products.

Ghunaimat noted the increase in the number of tourists that visited Jerash during the first four months of 2019, which reached 92,000 visitors.

The exhibition includes agricultural and traditional products such as dairy, oil, olives, medicinal and aromatic herbs, thyme, legumes and bread.

The opening ceremony also included a reenactment of the Roman legionaries’ formations, the chariot race and gladiator fights, all at the hippodrome of Jerash.

Feryal Nizami, a participant, said that the expo was a “big” opportunity to sell out her home-prepared thyme, sesame seeds, apricot jam and honey.

“It was also an important chance to promote my home business and add more customers that would buy from me around the year and not only during the exhibition,” she added.