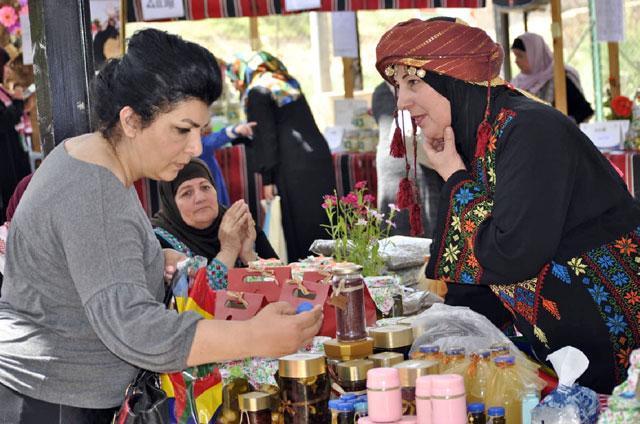 JERASH — Jerash’s second Labaneh Festival drew customers from around the Kingdom on Friday who came to sample and buy homemade dairy products.

The city of Jerash, 45km north of Amman, is renowned for its high-quality and fresh dairy products, which are still prepared the traditional way by the local community.

The two-day event was funded and organised by UAE-based CSR-Al Ahli Holding Group in cooperation with the Women Empowerment Unit at the Greater Jerash Municipality, the German Agency for International Cooperation and the ministries of tourism, planning and international cooperation.

During the opening ceremony attended by HRH Princess Sumaya, Director of CSR’s Social Responsibility Department Lina Hourani said that the festival aims to become an annual event to allow the local community to sell their “trademark” labaneh.

More than 55 local women showcased their dairy products, while around 30 others displayed handicrafts and traditional costumes, Hourani said.

Jerash Mayor Ali Gogazeh said that the festival also aims to support women’s economic participation in their communities, adding that doing so contributes to the achievement of sustainable development in all parts of the Kingdom.

Last year, the festival quadrupled the number of visitors to the ancient city of Jerash, who came to tour the archaeological sites and buy dairy products at the festival. Last year, Jerash received 5,000 visitors during one day of the festival.