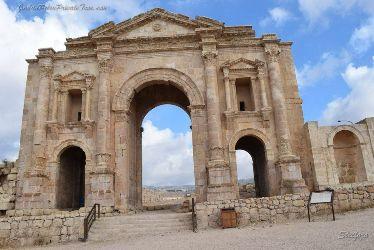 AMMAN — During an excavation work carried out by the German-Danish team in Jerash, remains of a building constructed on the bedrock and destroyed by the earthquake in 749AD were found.

They were multi-storeyed houses, which seem to have had large layouts with internal courtyards, she said, adding that these houses were destroyed in the middle of the 8th century AD as a result of the earthquake, which struck Gerasa/Jerash on January 18, 749 AD.

The German-Danish team also unearthed artefacts and coins inside these buildings. ”We found all the artefacts, which had been present in the houses at the time of the earthquake. Several artifacts, made of entirely organic material, would of course have disappeared before our excavations and therefore, no wooden objects were found,” said Professor Achim Lichtenberger from University of Münster, highlighting that in the House of the Scroll the team excavated parts of a courtyard in front of a set of rooms, of which one had served as a kitchen.

“In this kitchen we found a string of cooking objects and food preparation activities, but we also found many objects, which were related to textile production. Furthermore, we found all the objects which had fallen down from the upper storey, when it collapsed which indicate that the nicer objects, such as jewellery and glass vessels had been kept upstairs as well as a box with a collection of scrap metal, partly dating to the Byzantine period,” Lichtenberger said, stressing that they encountered a small coin hoard, which consisted of Late Byzantine and early Umayyad coins.

In the House of the Tesserae, the situation was quite different, Raja said, adding, “We have found an extensive house, which had been undergoing restoration at the time of the earthquake. In one of the room to which there was access through an arched passageway from the entrance, we found elements, which pertained to mosaics production.”

Late Byzantine coins as well as some pre-reform Umayyad coins were also found in the House of the Scroll.

“The Umayyad coins used the iconography of the Late Byzantine coins and underline the cultural continuity in the region, although rulers had changed,” Raja noted, adding that the coins were most likely collected for the worth of their metal and they might not have been in circulation anymore.

Coins had been laying in a textile purse somewhere, most likely on the upper floor of the house where the other objects of a high quality also came from, Lichtenberger pointed out, adding that Umayyad coins were found in the building

“These coins were minted in the decennia before the earthquake and were in circulation side by side with earlier coins from the Late Roman and Byzantine periods,” Lichtenberger said.