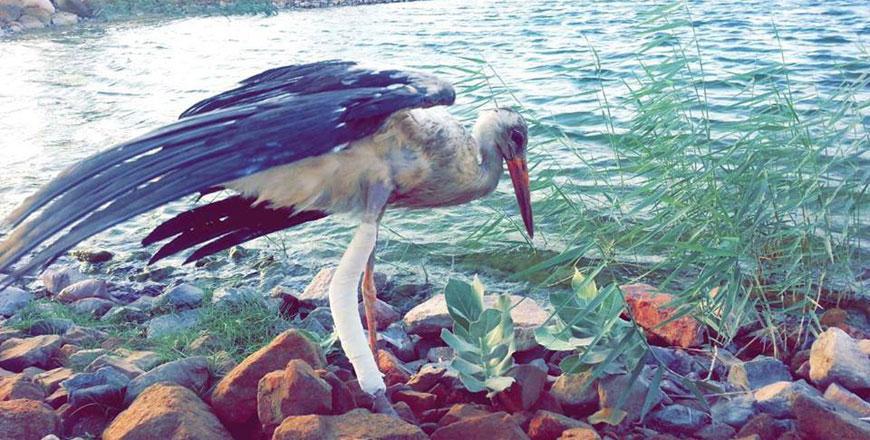 AMMAN — When Aqaba-based Ayla Oasis planners perfected the concept of sustainability as an integral component of the mega development project, they foresaw every possible positive outcome of such integration, executives said. Except for one thing that came as a bonus, not only for the luxurious residential and commercial estate, but also for Aqaba and Jordan.

Stretching along 17km of a newly-introduced waterfront, with man-made lagoons as a signature feature of the project, the place has become an inviting environment for migratory birds, which are now a familiar scene that adds to the beauty and richness of the experience.

Jordan’s first 18-hole golf course provides an extra attraction for birds, especially since Aqaba has no green surfaces, according to Feras Rahahleh, director of Aqaba Bird Observatory (ABO), which is affiliated with the Royal Society for the Conservation of Nature and a partner and neighbour of Ayla.

In Ayla s story with migratory birds, history repeated itself. A similar story that involved the element of environmental preservation and the subsequent creation of a safe haven for a wide range of migratory birds has been evolving next-door since the 1980s.

Then, a wastewater treatment plant was built in Aqaba, and produced water that had to be disposed of somewhere outside the city. The answer was evaporation ponds on the edge of the town that made it possible to plant a forest on an area of half a square-kilometre in 2004, after the area came under the jurisdiction of the Aqaba Special Economic Zone Authority (ASEZA).

The ponds and the trees, both native and introduced, invited the different species of migratory birds, some of which even found in the warmth of Aqaba an alternative to their original final destination: Africa, according to Rahahleh.

The outcome was a partnership that has added to the tourism landscape of Aqaba, a Red Sea resort some 340km south of Amman.

Ayla s CEO, Sahel Dudin, told The Jordan Times during a tour of both spots on Thursday that his company has paid "meticulous attention" to the aspect of environmental sustainability, taking on the observatory next door as a strategic partner in this endeavour.

"We have invested in creating a harmonious environment where plant, marine and other life forms are preserved despite the ongoing development in the area. Our efforts have been highly praised by conservationists nationwide, and we are collaborating with the Royal Society for the Conservation of Nature on the rehabilitation of particularly delicate migratory birds, such as pelicans, that have been subjected to abuse or mistreatment by offering our premises as a safe haven.”

Rahahleh agreed. He explained that the sea environment in Aqaba is not attractive to birds due to the human and industrial impact, so the birds prefer the tranquility and safety of the development project, which residents mostly use as a holiday getaway. It also has fresh and brackish water ponds, along with the sea-water lagoons.

The partnership has paid off, according to the ABO director, citing 10,000 visitors in 2017, of whom 17 per cent were birdwatchers and 35 per cent school and college students and members of youth clubs from around the Kingdom. They had the chance to see 242 species of migratory birds using the area as a temporary summer home, constituting 55 per cent of the total number of such birds recorded in Jordan.

Rahahleh said that the visitor turnover was good news, yet the relatively new attraction still had untapped potential, especially in light of the huge and growing bird watching industry in Western countries.

According to a market analysis study, Americans spend $41 billion annually on activities and travels related to bird-based tourism, while Britons spend $500 million a year on the hobby.

ASEZA seeks a slice of this promising type of tourism, said the authority s Tourism Commissioner Sharahbeel Madi. He noted that despite the current modest numbers of visitors to ABO, the trend has been up steadily and is expected to rise significantly in the coming years. He added that the new attraction has been placed on the map of ecotourism in the region, side by side with the world-famous Wadi Rum.

"We have added bird watching to ASEZA s calendar of special events and plans are in place to improve and sustain this product," Madi told The Jordan Times over the phone on Monday.

In the meantime, ABO and Ayla are keeping an eye on the warmly welcomed guests, monitoring, counting and nursing the birds.