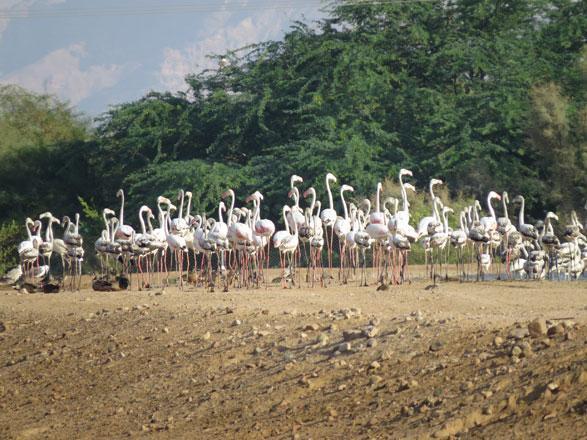 Bird Observers Rejoice at Sight of Migrating Flamingos in Aqaba

AMMAN — Bird observers are having the chance to experience watching flamingos up-close as they pick their meal from seawater at the Aqaba Bird Observatory (ABO).

Dozens of flamingos have been landing in the ABO over the past month as they pass through Jordan during their annual autumn migration.

“The number of flamingos varies by the day at the observatory, some stay for the day, others for a week or longer. Today, we counted 153 flamingos,” ABO Director Firas Rahahleh said.

While flamingos can be spotted in Jordan during their migration from the north of the Mediterranean Sea to its south, the number of those landing in Jordan is increasing.

“The number of flamingos which land in Jordan started to increase in the spring of last year. But the numbers this year are higher,” Rahahleh told The Jordan Times over the phone.

He attributed the increase in the number of flamingos resting in Jordan to a possible change in the birds’ habitat and areas where they usually rest on their migration route.

“Flamingos are found in Turkey and Russia among other countries in the region. During their migration, they look for warm areas to rest and feed,” the ornithologist highlighted, noting that, if flamingos continue to rest in Jordan during their migration for the coming four or five seasons, the ABO will push to be named as a site for watching flamingos, in addition to other already existing exotic and rare bird species.

Greater flamingos can be found in warm, watery regions on many continents, according to the National Geographic website, which indicated that they favour environments like estuaries and saline or alkaline lakes. They thrive on the extensive mud flats where they breed and feed.

Greater flamingos are the most widespread species of the flamingo family, according to web sources.

Rahahleh noted that Aqaba is located on the Rift Valley/Red Sea route, which is the world’s second most-used flyway. A total of 37 types of migratory soaring birds maintain flight by using rising air currents, travelling on the flyway annually. At least five of these species are globally endangered, such as white and black storks, buzzards, eagles and vultures, according to the RSCN.

Migratory birds in the southern hemisphere use the Rift Valley/Red Sea flyway to return to Europe and the northern hemisphere in the spring. On their journey, more than 1.5 million birds stopover in places like the Jordan Valley to rest and drink water.