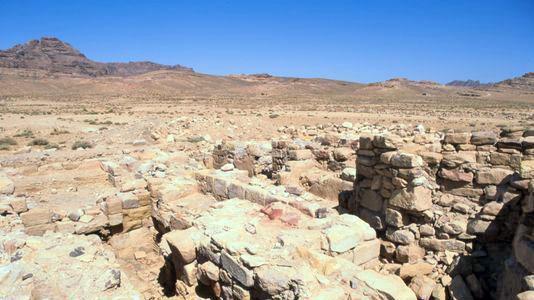 Ancient Nabataeans Were Using Roman Technology a Century before Occupation

AMMAN — The early adaption of an ancient heating system by the Nabataeans point to an outward-facing society, according to a Canadian archaeologist.

Ancient ceramic heating pipes, also known as tubuli, used in Humayma were cutting-edge technology when the Nabataeans began using them, said Craig Harvey, who worked at the site, 240km south of Amman.

“The tubulus — in combination with underfloor heating systems [hypocausts] — was the best way to heat a room,” said Harvey, noting that although the Nabataeans were using tubuli early; “these pipes only become common in Italy around 1st century AD”.

The Nabataeans quickly adopted it for their baths which used Roman-style heating systems, he continued, adding that he thinks it shows just how outward-looking the Nabataeans could be.

Nabataeans would see a technology which worked efficiently and would adopt it and make it their own, explained Harvey.

The Humayma Excavation Project has so far found two structures in Humayma with heating systems, the scholar continued.

“The first is the bath located in the settlement, which was built by the soldiers and contained a number of different types of pipes, which allowed me to make a typology and suggest tentative dates [the earliest here dates to the early 2nd century AD]. The other heated area at Humayma was a small heated room in the residence of the commander of the fort,” Harvey said.

Other rooms in this residence contained beautiful wall paintings, though the heated room did not, he stressed, adding that similar structures have been found dotted across Jordan and the region, including in Petra as well as the Decapolis.

“What is interesting is that the tubuli seem to have been a Roman invention, but they were used by the Nabataeans before Romans occupied the region, and the earliest examples of that technology were found in Wadi Rum and Wadi Musa where they date from the early 1st century AD.

“This is 100 years before the Romans came and started building baths for their soldiers [which they did everywhere they had a military presence],” Harvey noted.

The material the pipes were made of was ceramic, also used for water pipes. The water that supplied the military fort at Humayma came via an aqueduct that led water from a spring north of the site to a cistern built within the fort walls, he explained.

“Although similar to water pipes, tubuli didn’t carry water, but instead carried hot air and smoke like chimney pipes. Ceramic was specifically chosen because it could withstand the heat,” Harvey underscored.