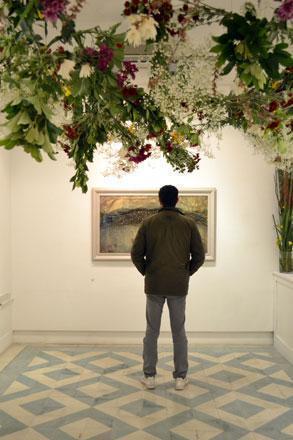 AMMAN — Jordan’s ecology is being celebrated through Algerian artist Hakim Jamain’s “Cultivating the Soul” exhibition; in a reawakening for the historical role of the artist as a scientist and a researcher driven by curiosity.

The solo show, currently held at Nabad Gallery, serves as an appeal for a romanticised look into nature. The show welcomes its visitors with a flower-based installation, nudging their willingness to use their sense of smell for a visual interaction.

The physicality of Earth and soil, although a rather cliché topic, was compellingly morphed into a call to capture not the end result of natural exploration, but the process of involving oneself in what lies under the outer shell of what we are capable of seeing.

“This exhibition, as you may say, is like doing research. My concept was to do an installation where the person smells the flowers first in order to become mentally prepared to go into the exhibition and do their own interpretation of nature”, Jamain said in an interview with The Jordan Times on Sunday.

Reinforcing the installation is his relief-like paintings which are inspired by the short Jordanian spring, as Jamain explains: “All my work is inspired by the short spring in Jordan, which lasts two to three weeks maximum. But in that short period, the land experiences diverse and vibrant ecological growth. The almond tree is the first tree to grow when the spring starts, so I placed it at the entrance to welcome the visitors to my show.”

With a rather nostalgic foretaste, Jamain’s calling card is the land, as the mother we belong to. His works are produced with rich textures, being inspired by sedimentary rocks, diverse Jordanian soil and all that grows out of it.

Textures in Jamain’s paintings are referenced back to what he finds beneath the land; the rocks, precious stones. “Nature is within me. It’s an essential thing; the land, in all its interpretations and the wider understanding of it as the mother and [humans’] feel for belonging,” the artist said.

Jamain added that his printmaking background has helped him appreciate the depth and shallowness in a work, as well as the courage to experiment with the chemistry of the mediums.

“I am a printmaker who is drawing and painting. The technique, although painterly, involves a sense of play with the chemistry and the different reactions between mixing mediums.”

His multilayered technique has also shaped an identity for his works. His compositions direct the viewer’s gaze from the soil to what appears above it, and has made his work recognisable.

Jamain’s art is never outlined beforehand. He listens, smells and observes, while his art is the answer to his curiosity for his surroundings. Given such a dedication for nature, Jamain takes it as a responsibility to be more than just an artist who creates aesthetically pleasing artwork, but rather an explorer and a scientist. He also trusts that his art can be a means to create an incentive for visitors to explore the resources we always take for granted.

“I do consider myself a researcher of nature, my knowledge extends beyond the visual aspects; as I even focus on also studying entomology and ornithology to understand the context of my inspirations. Artists have to be scientists in their research for resources first, as well as in creating their own formulas for mediums,” Jamain said.

“When I present nature through my art, I urge the viewers to go and delve into Jordanian nature. Such resources are not paid justice in terms of the influx of people they receive.”