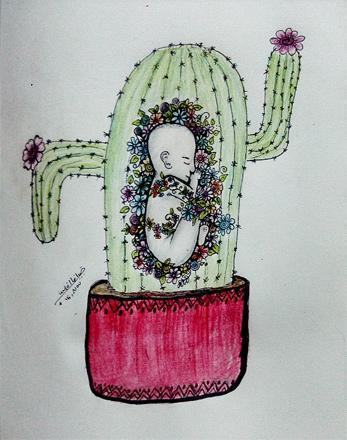 AMMAN — The United Nations Population Fund (UNFPA) Jordan and Seven Circles on Thursday announced the winners of their “Youth Empowerment Online Cartoon Competition”, according to a joint statement sent to The Jordan Times.

The competition was launched on November 1, in collaboration with renowned cartoonist Omar Abdallat. Sara Gharaibeh, 20, of Ajloun and Huda Alamy, 29, of Amman were announced as winners of the $500 prize. According to the statement, they will also have their cartoons featured on Working Dreamers, UNFPA Jordan and Hayat Al Shabab’s websites.

Sara Gharaibeh’s cartoon titled, “My Cactus”, represented motherhood and depicted a cactus containing a foetus surrounded by flowers. It was selected through fan votes submitted on the online platform, Working Dreamers.

“The subject of motherhood is extremely important, and the least I can do is portray it as a cactus to show all of the compassion and patience that exists in motherhood,” said Sara.

Huda Alamy’s cartoon titled, “Do Your Best, We Want a Boy”, depicted a mother surrounded by six young daughters as she harbours a male foetus representing her pressure to have a boy.

“It’s not nice for a mother... when people ask her to give birth to a boy, which is something out of her control,” the description said.

“I was so happy to participate in this competition,” Huda said in the statement, adding that “it highlighted topics that should be introduced to the younger generation”.

“Huda’s cartoon is something that many mothers, young and old, who feel the need to have a boy, even at the expense of their health and well-being, can relate to,” Baker said in the statement.

The online competition was held from November 1 to 30, and invited youth in Jordan of all nationalities, aged 15-30, to submit original cartoons that creatively highlight one of three maternity-related topics.