Speaking of his group’s recent partnership signed with Jordan’s government, Chief Executive Officer of Airport International Group PSC Kjeld Binger said that it ranked among the top 40 deals reached by both the private and public sectors worldwide.

The partnership exemplifies what is achievable when both sectors come together for a project that would benefit the whole local community.

“Our partnership with the Government of Jordan has emerged as one of the best 40 arrangements brokered between the public and private sectors around the world, reflecting a great example of what can be achieved when the two sectors meet to implement projects that benefit the entire community,” Binger told Asharq Al-Awsat.

He cited a former contract signed with Jordan’s prime gateway to the world, the Queen Alia International Airport (QAIA) that saw remarkable success. In 2016, QAIA saw a millions-worth expansion project be completed under budget and ahead of schedule.

Increasingly, he said that investment opportunities in Jordan remain optimistic despite regional turbulence. He said the country holds potential needed for becoming the region’s next top tourism destination, given its geographic location.

“Overcoming challenges has helped establish QAIA as one of the most important airports in the Middle East,” Binger added.

“Our experience in Jordan has been – and continues to be – a positive one.”

Jordan is nestled just off Gulf waters, with accessible flights and year-on festivals, its economic development would tap into the country’s prosperity.

After the upgrade, QAIA received a record-breaking 7.4 million passengers, marking a 4.4 increase since 2015. Airfield traffic saw a slight rise of 73,700 takeoffs, and a growth rate of 2.8 percent, more than 2015. 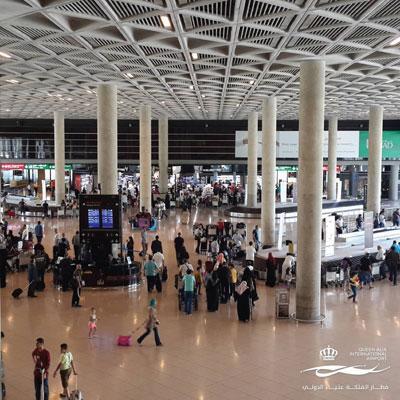 “We have been able to benefit from the vast experience of our regional and international partners in airport management and construction—it all played well into rehabilitating, expanding and operating QAIA,” Binger explained.

The second phase of the QAIA expansion and development efforts was launched in 2016 under the patronage of Crown Prince Hussein bin Abdullah II.

“One of the vital improvements made was the increase in passenger capacity, which rose to 12 million passengers, nearly three million more than during the first phase of the project,” Binger said.

Passenger capacity was augmented by the recent addition of 12 terminals. QAIA now has a total of 25 active gates, including eight ground gates and 17 boarding bridges.

“Gates are operated by four upgraded jet bridges and two fixed bridges designed to serve large-scale aircraft, such as the twin-decker Airbus A380, the world’s largest passenger jet,” Binger said.

As for infrastructure, the airport now enjoys an additional 10 mobile bridges, 24 escalators and 18 elevators. Facilitating passenger navigation within the airport, the add-ons allow passengers to board their flights and move around the QAIA easily and more freely.

“We also plan to further develop the infrastructure to increase passenger capacity to 16 million by 2032, establishing Queen Alia International Airport as a regional hub for leisure and business travel,” said Binger.