Systematic aerial surveys carried out in Jordan’s Eastern Badia region since 1998 and about 10 years of simplified satellite image analysis have led to the discovery of multiple prehistoric sites, according to a Dutch archaeologist.

“Archaeological exploration of the Eastern Badia began towards the end of the 19th century, and it initially focused on the investigation of settlements and buildings of the Roman [63 BC until the early 4th century] and Early Islamic periods [7th and 8th centuries AD],” Professor Peter Akkermans from University of Leiden said. 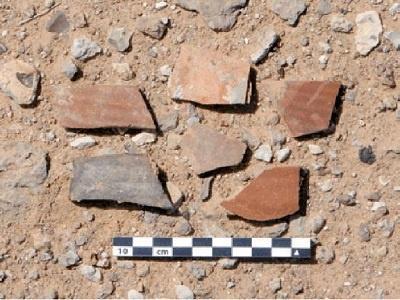 He said that the study of prehistoric settlements began in the first half of the 20th century.

However, it was not before the 1970s and 1980s that similar survey and sounding work resumed on an equivalent scale, Akkermans told The Jordan Times in a recent interview.

Among the regions which were not included in older research and newer study programmes is the region stretching between the Azraq Oasis and the border to Saudi Arabia, Akkermans said.

“Its north-south extension covers a distance of about 50km, while its width is about 25km from east to west. It reaches out on both sides of the Azraq-Al Umari Highway, between the western limestone region and the eastern basalt area,” Akkermans said.

The shallow depression is considered as the northern end of Wadi Sirhan, and it forms the main route between Bilad Al Sham and the region of Jawf in the western part of Saudi Arabia, he said.

Next to groundwater wells, such as “desert lakes”, belong the most significant water resources of the eastern desert steppes, the scholar said.

“They still are occasionally used by the nomadic population, at least for purposes of animal hydration,” Akkermans said.

“The factors that attracted people to live in Khirbet Al Umari [located 25km southeast of Azraq] in the Early Islamic period are not easy to understand. The isolated site is located in a remote and highly arid landscape, which is poorly suited for permanent settlement,” Akkermans said.

The houses at the site all stood along a small wadi, which may have provided water for the inhabitants in the wetter parts of the year. Water probably was also obtained from nearby and easy-to-reach wells in the Qa’a Al Umari, Akkermans said.

Most likely, he continued, Khirbet Al Umari’s relevance in the Early Islamic period was mainly due to its location along the important trade route in Wadi Sirhan.

“Khirbet Al Umari probably was an important halting place for caravans along this trade route in Wadi Sirhan, connecting the many settlements in the Jordan Valley [and beyond] with those in modern-day Saudi Arabia, most notably Al Jawf,” Akkermans said.