A close second to Petra on the list of favorite destinations in Jordan is the ancient city of Jerash, which boasts an unbroken chain of human occupation dating back more than 6,500 years. Jerash lies on a plain surrounded by hilly wooded areas and fertile basins. Conquered by General Pompey in 63 BC, it came under Roman rule and was one of the ten great Roman cities of the Decapolis League.

Jerash is one of the best-preserved Roman-era cities in the world. Located only 40 kilometers north of Amman, visitors today can trace the chariot ruts on the Cardo, admire the mosaics which were laid contemporaneously to those found in Madaba, and test the acoustics of the North and South Theatres. Inhabited since Neolithic times, Jerash came of age when Pompey swept through the region in 63 BC Jerash became one of the largest cities in the Decapolis federation. Today's cultural events, like the Jerash Festival and the Roman chariot races, which take advantage of the unique setting and fantastic acoustics of the restored theatres, bring back some of the excitement and bustle that must have marked Jerash during its heyday. 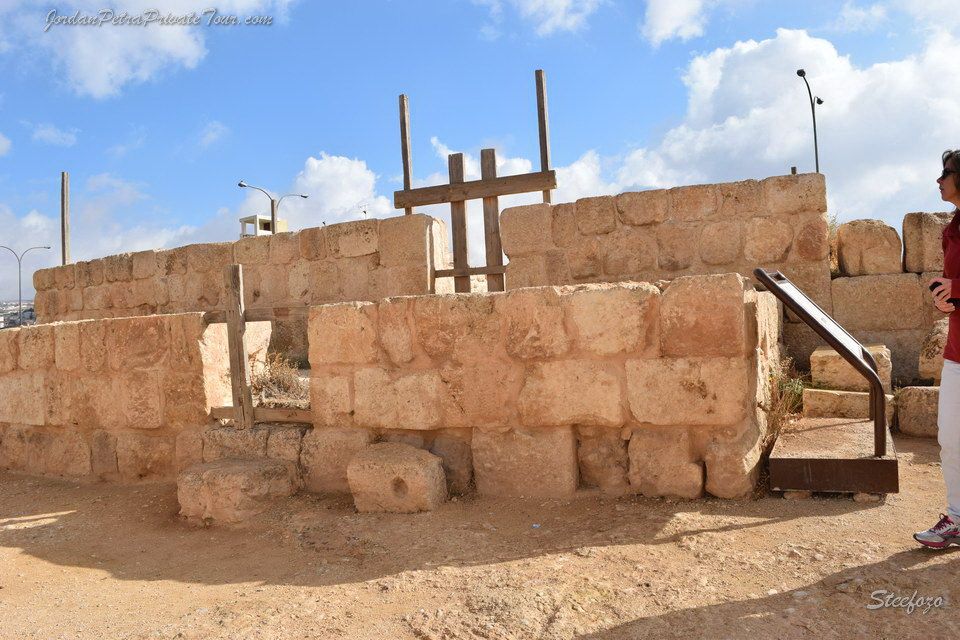 The history of Jerash can be traced in its name. The indigenous Semitic inhabitants in the 1 st century BC called it "Garshu." The Greeks founded "Antioch on the Chrysorrhoea," or the Golden River, on the same spot, naming it for the stream that runs through the area. The Romans who came in with Pompey changed the original name Garshu to "Gerasha." This name can be found in Pliny's Natural History, when he discusses the Decapolis. In the 19th century, the Circassians and Arabs who lived in what was then a small, rural community arabicized the name to "Jerash.'

Jerash was linked to the trade routes by a series of roads that led to other major trade centers like Amman, Bosra, Damascus, Pella and Petra. During the Pax Romana, Roman troops and international caravans were used these roads, bringing new ideas and energy with them. Emperor Hadrian visited in 129 AD and a Triumphal Arch was built in his honor near the Hippodrome. The highest of the three arches was 13 meters high and originally all three had wooden doors. Today, the Arch still stands and is in the final stages of restoration. The inspiration of these visitors is reflected in these amazing buildings. 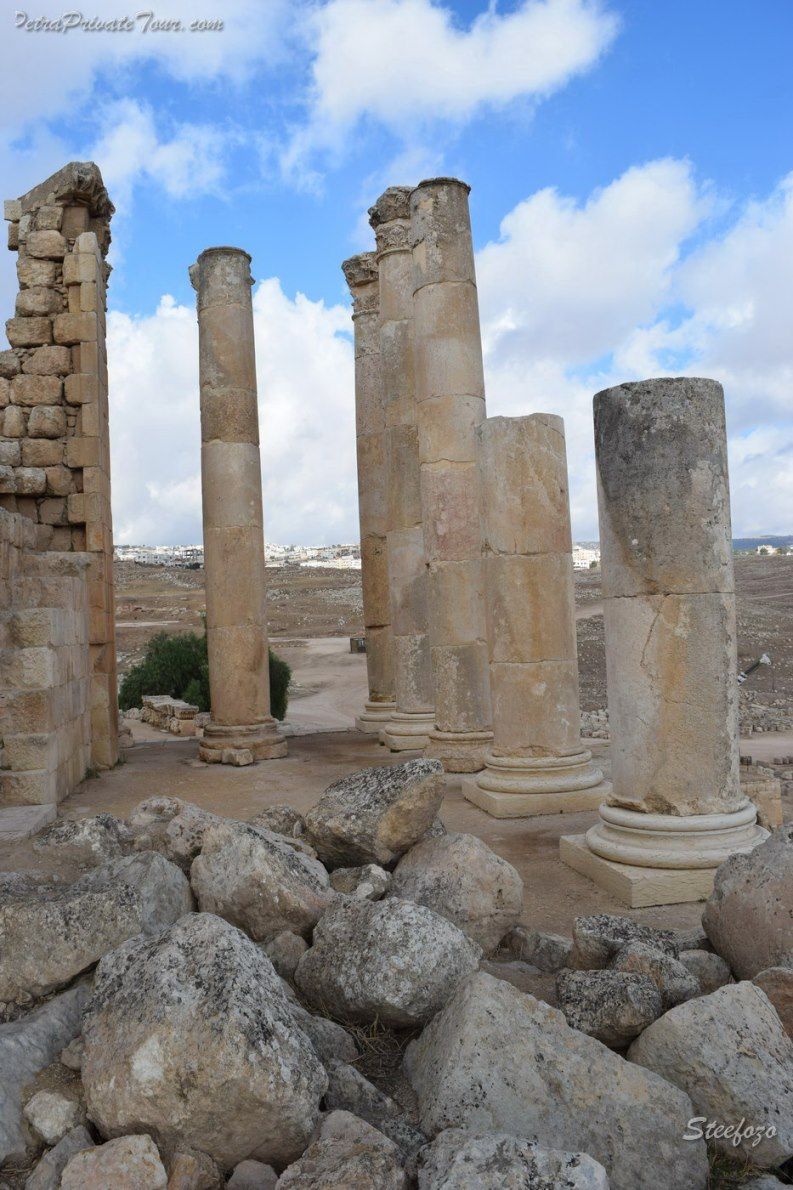 Emperors Trajan and Hadrian, during the first half of the 2nd century, encouraged the construction of many of the buildings still extant today. Jerash became rich from iron ore mining in Ajlun, agricultural farming on the surrounding plains, and levying taxes on traders coming through the area, much like customs duties are levied now. However, inscriptions on many of the buildings, most prominently on the South Theatre, indicate that individuals and guilds donated money to help fund the construction. An individual named Titus Flavius, son of Dionysius, for example, donated some of the seats in the Theatre. With a possible population of about 25,000 people at its height, there may have been an enormous amount of money for civic architecture.

The initial structure consisted of a compact nucleus stronghold with four main towers. Subsequent enlargements followed immediately with the addition of two more towers between 1184 and 1193 AD. Between 1193 and 1218, during the times of AL Malek AL Adel, the second stage of construction was completed with enlargements by the castle governor Aybak Bin Abdullah. He added and the seventh tower, which wraps around the southeast corner of the building.

Stage three of construction centered on the renewal of the northeast tower when the castle was used as administrative center during the reign of AL Malek AL Nasser Salhudin Yousef between 1250 and 1259. 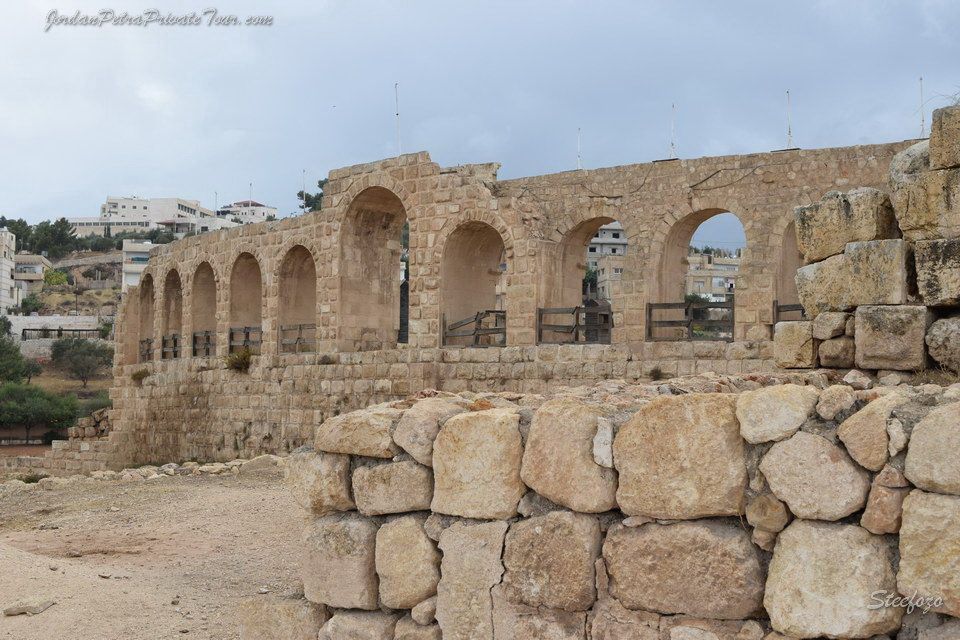