Qasr Amra:  also transcribed as Quseir Amra or Qusayr Amra, is the best-known of the desert castles located in present-day eastern Jordan. It was built early in the 8th century, some time between 723 and 743, by Walid Ibn Yazid, the future Umayyad caliph Walid II, whose dominance of the region was rising at the time. It is considered one of the most important examples of early Islamic art and architecture. The discovery of an inscription during work in 2012 has allowed for more accurate dating of the structure.

The building is actually the remnant of a larger complex that included an actual castle, of which only the foundation remains. What stands today is a small country cabin, meant as a royal retreat, without any military function. It is most notable for the frescoes that remain on the ceilings inside, which depict, among others, a group of rulers, hunting, naked women and, above one bath chamber, an accurate representation of the zodiac. These have led to its designation as a UNESCO World Heritage Site, one of four in the country. That status, and its location along Jordan's major east–west highway, relatively close to Amman, have made it a frequent tourist destination.

Qasr al-Azraq:  "The Blue Fortress" - is a large fortress located in present-day eastern Jordan. It is one of the desert castles, located on the outskirts of present-day Azraq, roughly 100 km (62 mi) east of Amman.

Its strategic value came from the nearby oasis, the only water source in a vast desert region. The name of the fortress and associated town came from these. The settlement was known in antiquity as Basie and the Romans were the first to make military use of the site, and later an early mosque was built in the middle. It did not assume its present form until an extensive renovation and expansion by the Ayyubids in the 13th century, using locally quarried basalt which makes the castle darker than most other buildings in the area.

Later, it would be used by the Ottoman armies during that empire's hegemony over the region. During the Arab Revolt, T.E. Lawrence based his operations here in 1917–18, an experience he wrote about in his book Seven Pillars of Wisdom. The connection to "Lawrence of Arabia" has been one of the castle's major draws for tourists. 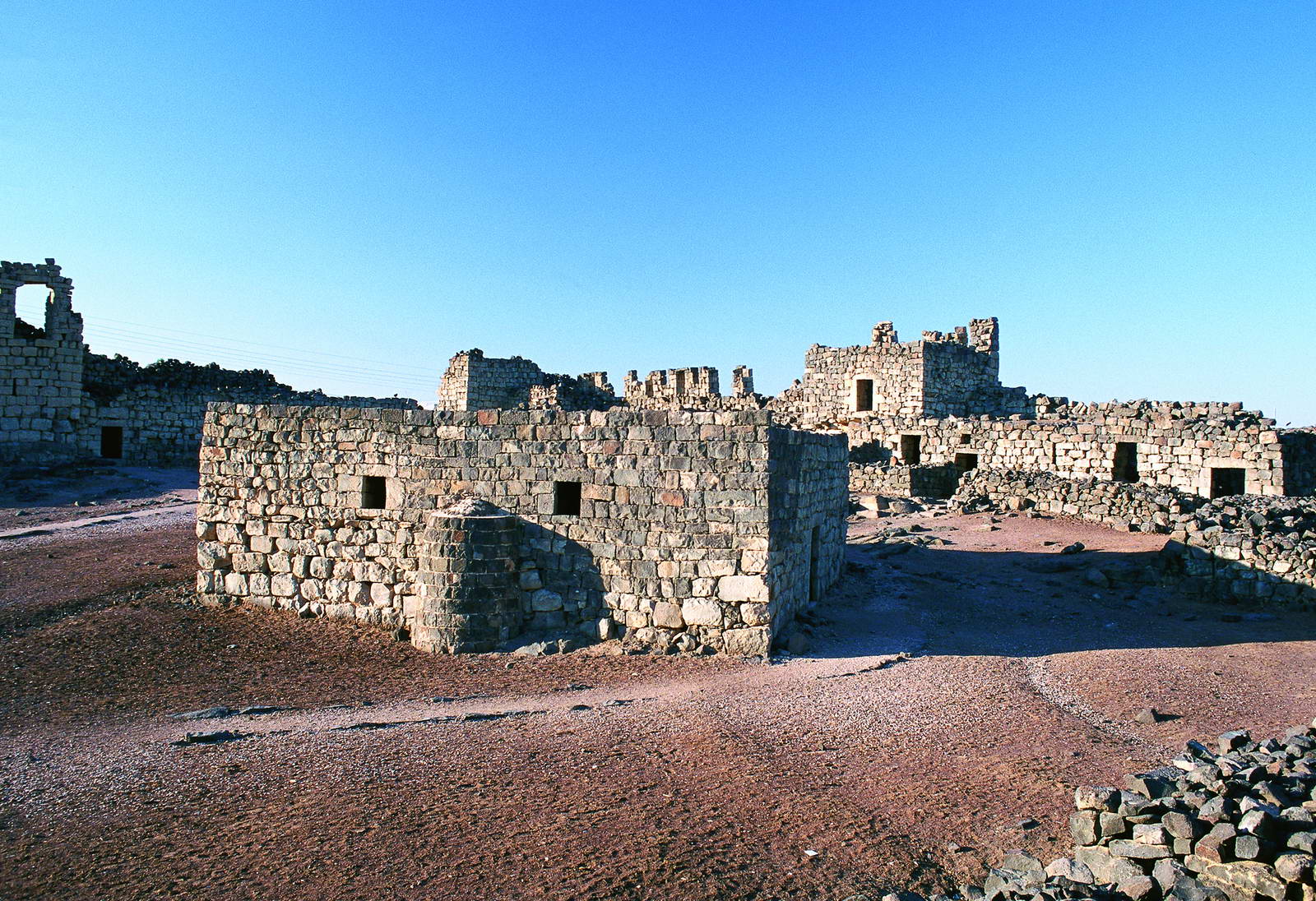 Qasr Kharana:  sometimes Qasr al-Harrana, Qasr al-Kharanah, Kharaneh or Hraneh, is one of the best-known of the desert castles located in present-day eastern Jordan, about 60 kilometres (37 mi) east of Amman and relatively close to the border with Saudi Arabia. It is believed to have been built sometime before the early 8th century AD, based on a graffito in one of its upper rooms, despite visible Sassanid influences. A Greek or Byzantine house may have existed on the site. It is one of the earliest examples of Islamic architecture in the region.

Its purpose remains unclear today. "Castle" is a misnomer as the building's internal arrangement does not suggest a military use, and slits in its wall could not have been designed for arrow slits. It could have been a caravanserai, or resting place for traders, but lacks the water source such buildings usually had close by and is not on any major trade routes.

It remains very well preserved, whatever its original use. Since it is located just off a major highway and is within a short drive of Amman, it has become one of the most visited of the desert castles. Archaeologist Stephen Urice wrote his doctoral dissertation, later published as a book, on Qasr Kharana, based on his work restoring the building in the late 1970s. 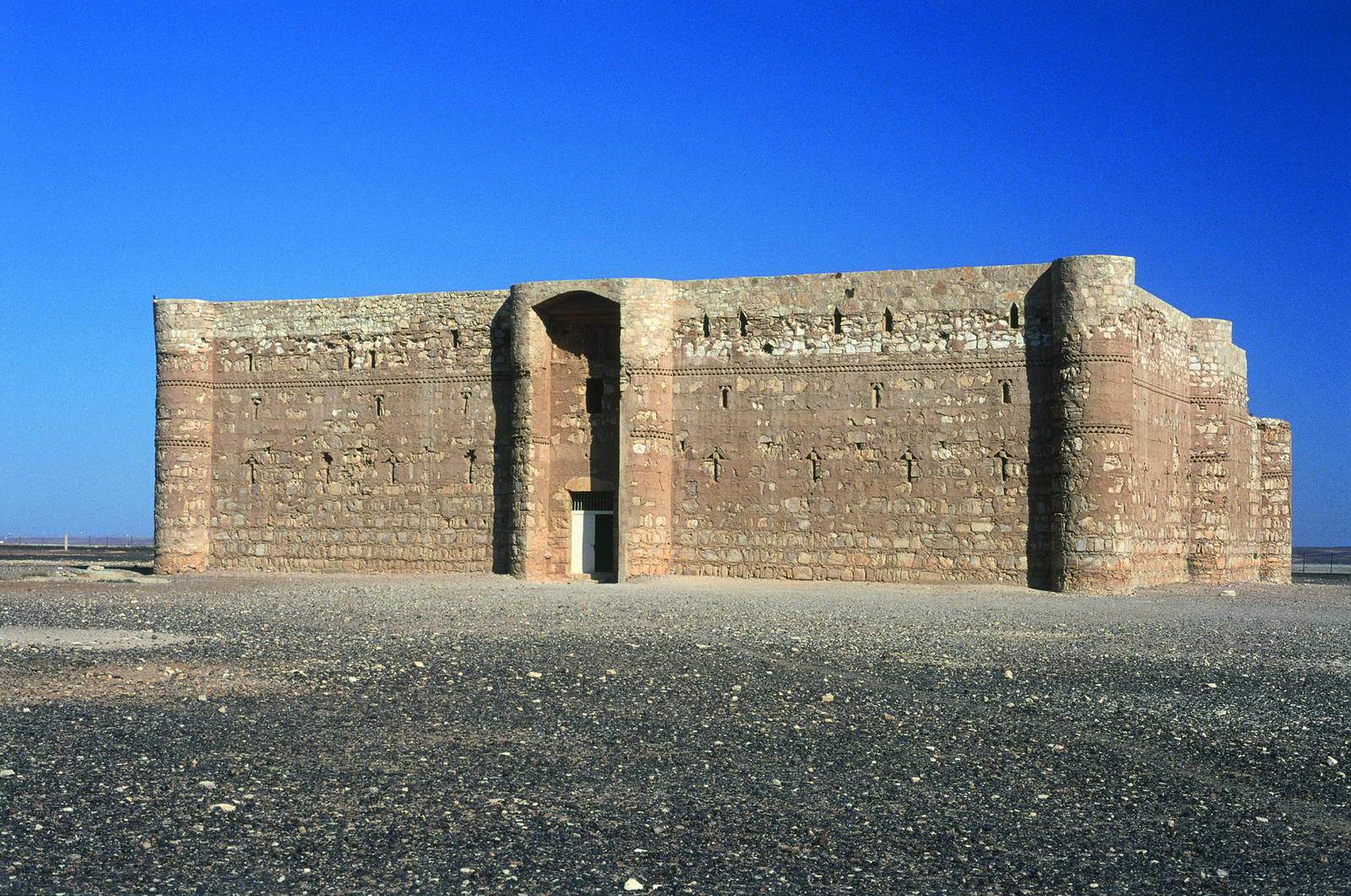 Al-Azraq Oasis: The Azraq Wetland Reserve is a nature reserve located near the town of Azraq in the eastern desert of Jordan. An oasis for migratory birds, Azraq was established in 1978 and covers 12 square kilometres (4.6 sq mi). The natural springs dried up in 1992 and most migratory birds subsequently moved away from the area. Artificial springs are maintained today in order to keep the site a tourist destination. 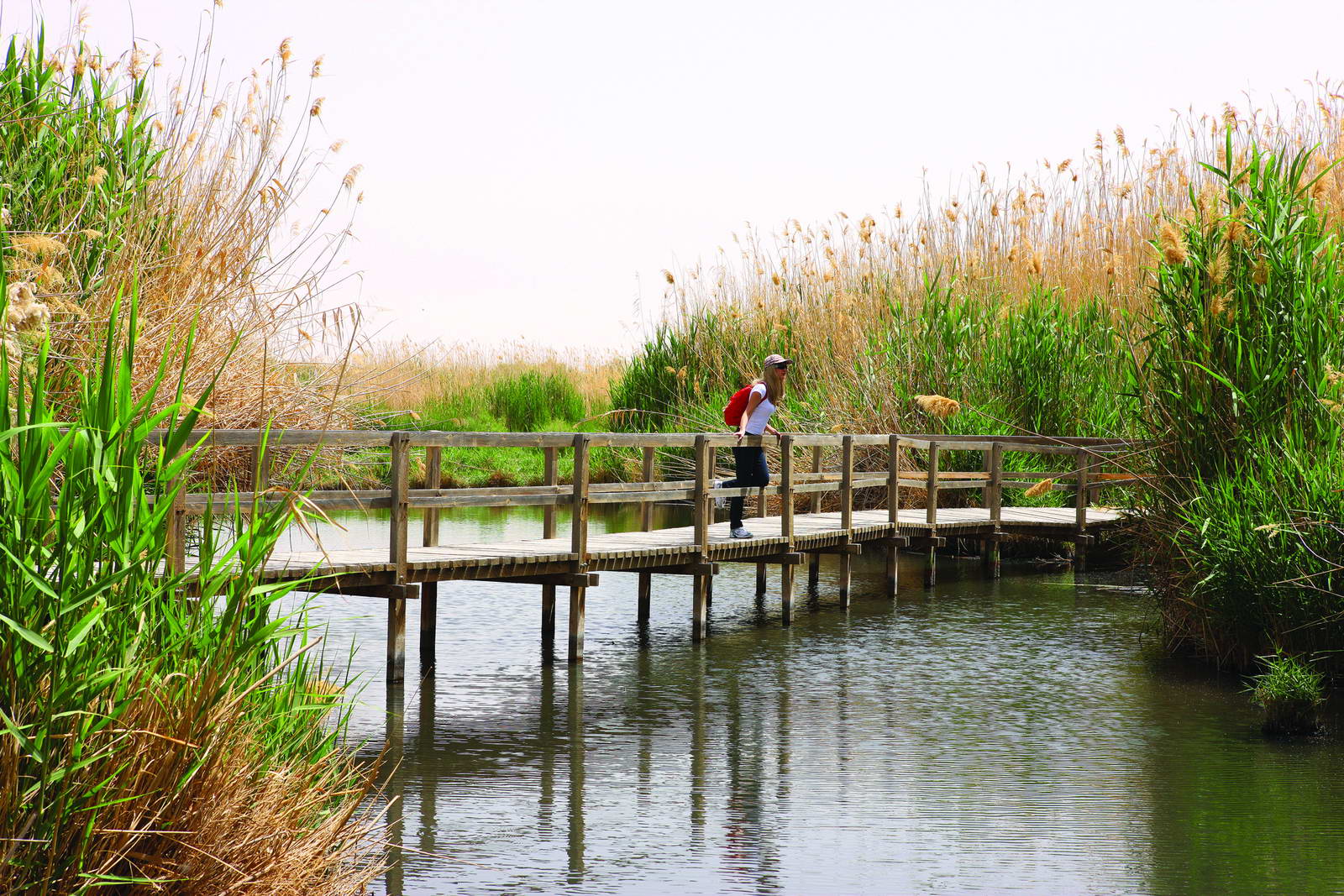 Umm el-Jimal:  "Mother of Camels"), also known as Umm ej Jemāl, Umm al-Jimal or Umm idj-Djimal, is a village in Northern Jordan approximately 17 kilometers east of Mafraq. It is primarily notable for the substantial ruins of a Byzantine and early Islamic town which are clearly visible above the ground, as well as an older Roman village (locally referred to as al-Herri) located to the southwest of the Byzantine ruins. The Nabataeans were people of surprises. Not only did they create the amazing city of Petra, they built the northern city of Umm al-Jimal. Using the local rough black basalt instead of the soft rose sandstone of Wadi Musa, they created an eerie black city whose name, "Mother of Camels," indicates its function as a trading town, as it had precisely what caravans needed: water, food, shelter, and people to buy things. Built only 6 kilometers from the Roman Via Nova Triana, which linked northern Jordan and the Decapolis with the south and trading points farther out, Umm al-Jimal was well-placed to take advantage of the spice, incense, and silk routes. 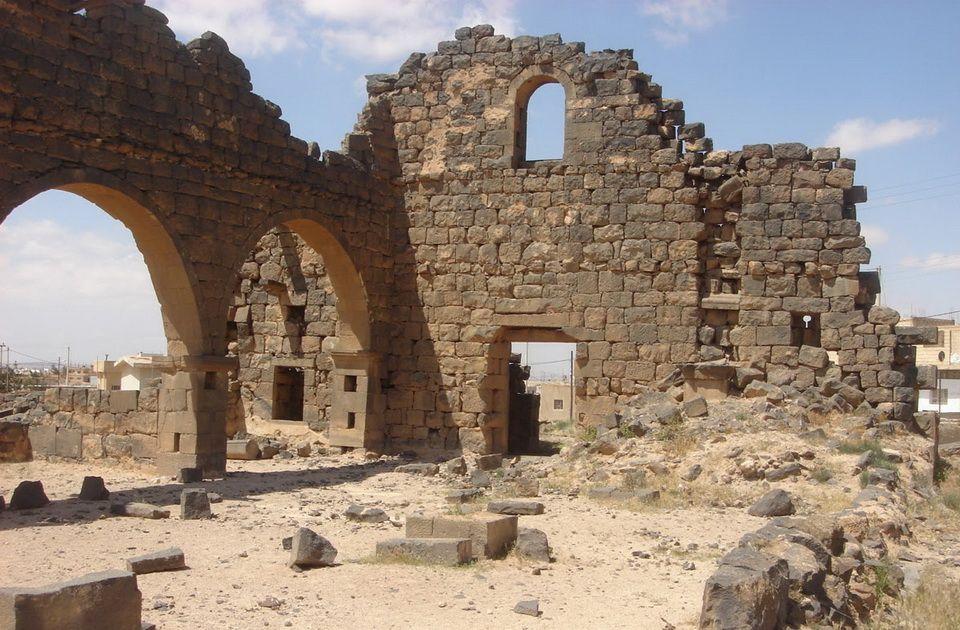